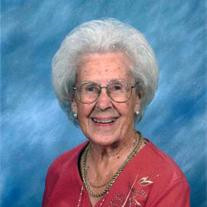 (To view Video Tribute you need a Broadband - DSL or Cable - connection) Marilyle Wright, age 89, of Damascus, Virginia, passed away July 16th, 2006 at the residence of her daughter, Johnsie Morgan in Kingsport, Tennessee. Marilyle spent most of her life in Damascus, but resided the last 10 years with her daughter, Johnsie in Kingsport She was preceded in death by her husband of fifty years, L. H. Wright Jr. She was a retired Elementary Teacher in the Washington County School Systems. She was a member of Glen Alpine United Methodist Church in Kingsport and a former member of Damascus United Methodist Church. She was very active in the Daughters of the American Revolution. She is survived by three daughters, Johnsie Morgan and husband, John, of Kingsport, Virginia Lee Widener and husband, Will, of Damascus and Darlene Baumgardner and husband, Calvin, of Damascus; one son, L. H. Wright III and wife, Kathy, of Leonardtown, MD; two sisters, Johnsy Cole, of Roxboro, N. C. and Dorothy ReMine, of Bristol, TN; one brother, Robert Wolfe, of Meadowview; fourteen grandchildren; eighteen great grandchildren; one great great grandson; and several nieces and nephews. The funeral service will be conducted at 2:00 P.M. Wednesday, July 19, 2006 at Damascus United Methodist Church with Rev. Steve Castle and Rev. Jane Ayers officiating. The committal service and interment will follow in the Sunset Memorial Park. Pallbearers will be grandsons. In lieu of flowers, the family requests that memorial contributions be sent to the Glen Alpine United Methodist Church, Glen Alpine Road, Kingsport, TN 37660 or Damascus United Methodist Church, P. O. Box 358, Damascus, VA 24236.The family will receive friends from 1-2 P.M. Wednesday, July 19, 2006 at the church prior to the funeral service. Condolences may be sent to the family and a video memorial tribute may be viewed at www.garrettfuneralhome.com. Marilyle Wright and her family are in the care of Garrett Funeral Home, 203 N. Shady Ave., Damascus, VA 24236, 276-475-3631.

(To view Video Tribute you need a Broadband - DSL or Cable - connection) Marilyle Wright, age 89, of Damascus, Virginia, passed away July 16th, 2006 at the residence of her daughter, Johnsie Morgan in Kingsport, Tennessee. Marilyle spent most... View Obituary & Service Information

The family of Marilyle Wright created this Life Tributes page to make it easy to share your memories.

Send flowers to the Wright family.