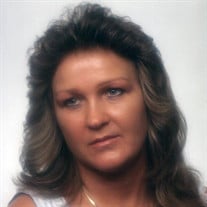 Margie Lane Agee, 67, of Damascus, VA passed away on Sunday, September 6, 2020 at her residence. She was born in Martinsville, VA on September 14, 1952, a daughter of the late Irvin Lane Davis, Sr. and surviving mother, Margaret Bowles Davis of Martinsville, VA. In addition to her father, she was preceded in death by her husband, David Lee Agee, on August 13, 2020. She had lived in Martinsville, VA for several years prior to moving to Damascus, VA in 2011. She was a retired nurse and enjoyed spending time on Facebook, watching Frazier on tv, and being outdoors. She really loved spending time with her grandkids, her dog Pebbles, and her cats. In addition to her mother, Margie is survived by one daughter, Lisa Atwood and her husband, Jimmy, of Meadowview, VA; one step-daughter, Angie Agee of Martinsville, VA; three grandchildren, Rylan Atwood and his fiance, Danielle, Adriene White and her husband, Luke, and Lia Atwood; one great granddaughter, Addison White; four sisters, JoAnne Compton and her husband, Connie, Cathy Hanna and her husband, Roger, and Rita Bowen, all of Martinsville, VA and Sandra Davis and her companion, Bobby, of Bristol, VA; two brothers, Irvin Lane "Buck" Davis, Jr. and his wife, Marie, of Chesapeake, VA and David Davis and his wife, Andrea, of Collinsville, VA; and several nieces and nephews. A memorial service will be held at a later date. In lieu of flowers, the family is requesting that donations be made to American Heart Association, P.O. Box 5216, Glen Allen, VA 23058. Condolences for the family may be sent and viewed by visiting www.garrettfuneralhome.com. Mrs. Agee and her family are in the care of Garrett Funeral Home, 203 N. Shady Ave., Damascus, VA 24236; ph.#: (276) 475-3631.

Margie Lane Agee, 67, of Damascus, VA passed away on Sunday, September 6, 2020 at her residence. She was born in Martinsville, VA on September 14, 1952, a daughter of the late Irvin Lane Davis, Sr. and surviving mother, Margaret Bowles Davis... View Obituary & Service Information

The family of Margie Lane Agee created this Life Tributes page to make it easy to share your memories.

Send flowers to the Agee family.