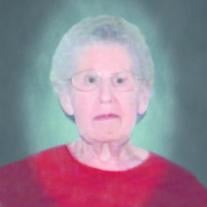 Margaret Elizabeth Cornett McCrady, of Abingdon, Virginia, passed away on Monday, December 24, 2012 at the West Haven Retirement Living in Abingdon, Virginia. She was formerly of and raised in Damascus, Virginia and was the daughter of the... View Obituary & Service Information

The family of Margaret Elizabeth Cornett McCrady created this Life Tributes page to make it easy to share your memories.

Send flowers to the McCrady family.