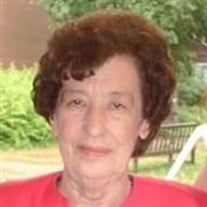 Margaret Ann Gentry, 81, of Richardson, TX passed away August 15, 2017 in Richardson, TX. She was born July 26, 1936 to Frank and Mildred Slagle in Alvarado, VA. She was married to William W. Gentry on December 15, 1957 in Angola, IN. He preceded her in death along with her brother, Gene Slagle as well as her parents. Margaret was a retired fleet coordinator and a member of the Eastern Star. Margaret is survived by two daughters, Kathy Canfield and husband, Mark of Perry, OH and Barbara Gentry-Schantz and husband, Thomas of Richardson, TX; one granddaughter, Tiffany Canfield Robison and husband, John; and two great grandsons, Jerry and Joseph Robison. Graveside services and interment will be conducted at 10:00 a.m., Monday, August 21, 2017 at Sunset Memorial Park, Damascus, VA with Pastor Mike Bowers officiating. Pallbearers will be family and friends. Family and friends are ask to meet at the cemetery at 9:45 a.m. Monday. Condolences for the family may be sent and viewed by visiting www.garrettfuneralhome.com. Mrs. Gentry and her family are in the care of Garrett Funeral Home, 203 N. Shady Ave., Damascus, VA 24236; ph.#: (276) 475-3631.

The family of Margaret Ann Gentry created this Life Tributes page to make it easy to share your memories.