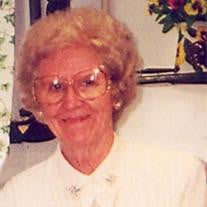 Margaret S. Fritz, age 83, of Damascus, Virginia, passed away on Saturday, September 1, 2007 at Wellmont Hospice House in Bristol, Tennessee. She was a native of Laurel Bloomery, Tennessee and was a daughter of the late Joseph and Annie Pennington. She had lived in Damascus, Virginia most of her adult life and was a member of the First Baptist Church in Damascus. She had served as secretary/treasurer for the Women?s Missionary Society for over forty years and she retired from McBee Systems in 1994. In addition to her parents, she was also preceded in death by her husband, Walter H. Fritz. She is survived by two sons, Kenneth Fritz and his wife, Angie, of Damascus, Virginia, and Tony Fritz and his wife, Sara, of Damascus, Virginia; three grandchildren, Jesse Fritz, Alesia Hutchinson, and Pam Fritz; and several nieces and nephews. The funeral service will be conducted at 11:00 A.M. Monday, September 3, 2007, at the graveside at Sunset Memorial Park with Pastor Brent Nidiffer and Rev. Wayne Guynn officiating. Pallbearers will be Tommy Blevins, Bob Blevins, Ken Nidiffer, Mike Blackburn, John Henderson Jr., and Jack Henderson. In lieu of flowers, the family requests that memorial contributions be sent to the Damascus Volunteer Rescue Squad, P. O. Box 458, Damascus, VA 24236. The family will receive friends from 7-9 P.M. Sunday, September 2, 2007, at Garrett Funeral Home. The family would like to extend a special thanks to the Wellmont Hospice House staff for all their wonderful care and to all the doctors and nurses that provided her care. They would also like to thank a special friend, Norman Reese, and his family for all their support. Condolences may be sent to the family by visiting www.garrettfuneralhome.com or you may fax condolences to 276-475-5902. Mrs. Fritz and her family are in the care of Garrett Funeral Home, 203 N. Shady Ave., Damascus, VA 24236, 276-475-3631.

Margaret S. Fritz, age 83, of Damascus, Virginia, passed away on Saturday, September 1, 2007 at Wellmont Hospice House in Bristol, Tennessee. She was a native of Laurel Bloomery, Tennessee and was a daughter of the late Joseph and Annie Pennington.... View Obituary & Service Information

The family of Margaret Fritz created this Life Tributes page to make it easy to share your memories.

Send flowers to the Fritz family.