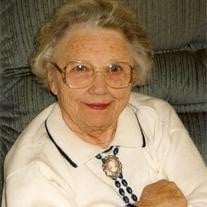 View this Videotribute Maggie Rhea Brown, age 99, of Damascus, Virginia, passed away on Monday, April 18, 2005, at home. She was a life long resident of Damascus, Virginia. Mrs. Brown and her late husband, Charlie Brown, owned and operated the former Brown Brothers Drug Store in Damascus, Virginia, from the early 1940's to the late 1960's. She was a member of the E-Nite Bridge Club in Damascus, and enjoyed crocheting and knitting. In addition to her husband, she was also preceded in death by one daughter, Lillian Brown, and one son, Charles Brown. She was a member of the Damascus United Methodist Church. She is survived by one son, Walter Brown and his wife, Vivian, of Damascus, Virginia; one sister, Laura Roberts and her husband, Blair, of Abingdon, Virginia; four grandchildren, Tim Brown and his wife, Lesa, of Mountain City, Tennessee, Betty Brown, of Mountain City, Tennessee, Cindy Blevins and her husband, Rocky, of Damascus, Virginia, and Mark Brown, of Abingdon, Virginia; five great grandchildren, Jenna Brown, Matthew Bray, Brett Blevins, Hayley Brown, and Clay Brown; and several nieces and nephews. The funeral service will be conducted at 8:00 P.M. Tuesday, April 19, 2005, at the Damascus United Methodist Church with Rev. Jane Ayers officiating. The committal service and interment will be at 11:00 A.M. Wednesday, April 20, 2005, at Sunset Memorial Park, Damascus, Virginia. Honorary pallbearers will be Paschal Grindstaff, Stuart Wright, Vernon Waters, Wilton Max Rhea, William Fuller, Ace Blevins, and Charlie Taylor. Flowers will be accepted or memorial contributions may be sent to the Damascus United Methodist Church, P.O. Box 358, Damascus, VA 24236. The family would like to express their heartfelt appreciation to the 5th floor nursing staff at Johnston Memorial Hospital, Lisa Cregger RN with Johnston Memorial Home Care, and Dr. Raina Sluder for all their special care given to Mrs. Brown. The family would also like to extend a special thanks to her dedicated care givers, Janet Coyne, Juanita Thompson, and Brenda Brown. The family will receive friends from 6-7:45 P.M. Tuesday prior to the funeral service at Damascus United Methodist Church. Condolences may be sent to the family and a memorial video tribute may be viewed at www.garrettfuneralhome.com. Mrs. Brown and her family are in the care of Garrett Funeral Home, 203 N. Shady Ave., Damascus, Virginia. (276) 475-3631.

The family of Maggie Brown created this Life Tributes page to make it easy to share your memories.

Send flowers to the Brown family.