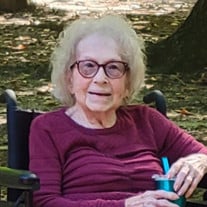 Mabel Stamper Adams, 97, of Konnarock, VA passed away on Thursday, January 6, 2022 at Mary Washington Hospital in Fredericksburg, VA. She was born in Konnarock, VA on June 12, 1924, a daughter of the late Arthur and Minnie Stamper. In addition to her parents, she was preceded in death by her husband, Henry D. Adams. She moved from Konnarock to West Virginia at the age of nine. After graduating from high school she moved to Arlington and got a job at Arlington Hall. There she was one of the code girls and broke the code for the atomic bomb and later the Japanese fleet positions in the Pacific. In 1945 she married Henry Adams and moved to Fairfax. Their son Stephen was born in 1952. They lived in Fairfax until moving back to Konnarock, VA in 2001. She had lived with her son and his wife in Fredericksburg, VA for the past six years. She was a member of St. Matthew Lutheran Church in Konnarock. Mabel is survived by her son, Stephen Adams and wife, Mary; three grandchildren, Thomas Adams and wife Kaili, Devon Adams and wife Sherry, and Shane Adams and wife Jessica; four great grandchildren, Desirae, Tobias, Samuel, and Elijah; and several nieces and nephews. A gathering of friends will be held from 5:00 PM until 7:00 PM Wednesday, January 12, 2022 at Garrett Funeral Home. The funeral service will follow at 7:00 PM Wednesday in the Riverview Chapel at Garrett Funeral Home with Pastor Harvey Atkinson officiating. For those unable to attend, a livestream of the funeral service will be on the Garrett Funeral Home FaceBook home page. The committal service and interment will be at 11:00 AM Thursday, January 13, 2022 at Laurel Valley Cemetery in Konnarock, VA. Pallbearers will be selected from family and friends. Condolences for the family may be sent and viewed by visiting www.garrettfuneralhome.com. Mrs. Adams and her family are in the care of Garrett Funeral Home, 203 N. Shady Ave., Damascus, VA 24236; ph.#: (276) 475-3631.

Mabel Stamper Adams, 97, of Konnarock, VA passed away on Thursday, January 6, 2022 at Mary Washington Hospital in Fredericksburg, VA. She was born in Konnarock, VA on June 12, 1924, a daughter of the late Arthur and Minnie Stamper. In addition... View Obituary & Service Information

The family of Mabel Stamper Adams created this Life Tributes page to make it easy to share your memories.

Mabel Stamper Adams, 97, of Konnarock, VA passed away on Thursday,...

Send flowers to the Adams family.