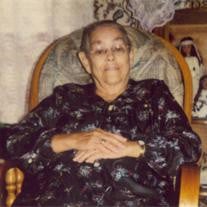 Lorraine Compton Riley, age 83, of Glade Spring, Virginia, went home to be with the Lord on Saturday, August 1, 2009 at the home of her daughter, Betty Hunt. She was a life long resident of Washington County, Virginia, and was the daughter of... View Obituary & Service Information

The family of Lorraine Riley created this Life Tributes page to make it easy to share your memories.

Send flowers to the Riley family.