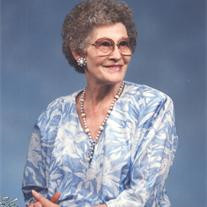 View this Videotribute Lorene McDaniel Blevins, age 83, of Konnarock, Virginia, passed away on Saturday, June 4, 2005, in the Smyth County Community Hospital in Marion, Virginia. She was a life long resident of Konnarock, Virginia, and was the daughter of the late Andrew and Cordelia McDaniel. She was a member of the Konnarock Seventh-Day Adventist Church. In addition to her parents, she was also preceded in death by her husband, Robert L. Blevins, and two brothers, Loren K. McDaniel and Lloyd A. McDaniel. She is survived by two daughters, Irma C. Jackson and her husband, Lee, of Troutdale, Virginia, and Patricia C. Blevins, of Glade Spring, Virginia; two sons, Ronnie L. Blevins and Bobby D. Blevins, both of Konnarock, Virginia; two sisters, Wanda Blevins and her husband, Lawrence, of Woodbridge, Virginia, and June Roop and her husband, Jack, of Troutdale, Virginia; two brothers, Lewis McDaniel and his wife, Pat, of Ypsilanti, Michigan, and Tom McDaniel and his wife, Pauline, of Smicksburg, Pennsylvania; nine grandchildren, nine great grandchildren, and several nieces and nephews. The funeral service will be conducted at 11:00 A. M. Tuesday, June 7, 2005, in the Garrett Funeral Home Chapel with Rev. Johnny Ray Finley officiating. The committal service and interment will follow in the McDaniel family cemetery in Konnarock, Virginia. Pallbearers will be selected from family and friends. Honorary pallbearers will be Lee Jackson and Elmer Reeves. The family will receive friends from 6-8 P. M. Monday, June 6, 2005, at Garrett Funeral Home. On line condolences may be sent to the family and a memorial video tribute may be viewed at www.garrettfunerahome.com. Mrs. Blevins and her family are in the care of Garrett Funeral Home, 203 N. Shady Ave., Damascus, VA. 24236, 276-475-3631.

The family of Lorene Blevins created this Life Tributes page to make it easy to share your memories.