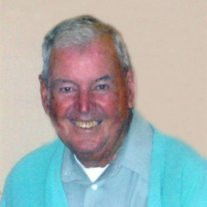 Logan Bowling, age 86, of Damascus, Virginia, passed away on Tuesday, May 28, 2013 at Johnston Memorial Hospital in Abingdon, Virginia. He was a native of Old Town, Kentucky and was a son of the late Logan and Eunice Bays Bowling. He lived in Temple City, California for many years prior to moving to Damascus, Virginia in 1989. He was a veteran of the U.S. Army, having served during World War II. Logan was a retired electrical mechanic and a member of the International Brotherhood of Electrical Workers. He was also a cattle farmer and a Kentucky Colonel. He attended the Laurel Avenue Church of Christ. In addition to his parents, he was also preceded in death by his wife, Cleo Blevins Bowling. He is survived by one daughter, Marilyn Holcomb of Temple City, California; two sons, Jerry Bowling and his wife, Kathleen, of Medfield, Massachusetts and Hugh Bowling and his wife, Agnes de Weerd, of Abingdon, Virginia; one sister, Rose Ellen Roberts of Whittier, California; three grandchildren, Andrew Bowling, Emily Cox, and Alex Bowling; and several nieces and nephews. The funeral service will be conducted at 11:00 A.M. Saturday, June 1, 2013 in the Riverview Chapel at Garrett Funeral Home with Pastor Shea Shrader and Mr. Wayne Baker, minister officiating. The committal service and interment will follow at Sunset Memorial Park in Damascus, Virginia with the Highlands Veterans Honor Guard and Virginia National Guard Honor Guard conducting military graveside rites. Pallbearers will be selected from family and friends. In lieu of flowers, the family requests memorial contributions be sent to Wellmont Hospice House, 280 Steele’s Road, Bristol, TN 37620. The family will receive friends from 10:00 A.M. to 11:00 A.M. Saturday prior to the funeral service at the funeral home. Online condolences may be sent to the family and a memorial video tribute may be viewed by visiting www.garrettfuneralhome.com. Mr. Bowling and his family are in the care of Garrett Funeral Home, 203 N. Shady Avenue, Damascus, VA 24236, ph.#: 276-475-3631.

Logan Bowling, age 86, of Damascus, Virginia, passed away on Tuesday, May 28, 2013 at Johnston Memorial Hospital in Abingdon, Virginia. He was a native of Old Town, Kentucky and was a son of the late Logan and Eunice Bays Bowling. He lived... View Obituary & Service Information

The family of Logan Bowling created this Life Tributes page to make it easy to share your memories.

Logan Bowling, age 86, of Damascus, Virginia, passed away on...

Send flowers to the Bowling family.