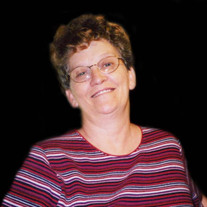 Linda Lou Rhudy, age 67, of Damascus, Virginia passed away, Wednesday, May 10, 2017 in the Johnston Memorial Hospital, Abingdon, Virginia following an extended illness. She was born in Damascus, Virginia. on December 11, 1949, a daughter of the late Jess and Mable Stanley Parson. In addition to her parents, she was preceded in death by six sisters, Jane Trent, Sue Parson, Kathy Whisnant, Pansy Townson, Joyce Widener, and Janice Parson; two brothers, Frank Parson and Mack Parson. Linda was a resident of Damascus for all of her life and enjoyed being with family and friends. She was a homemaker and devoted wife, mother, grandmother, great-grandmother, and sister. Linda is survived by her loving husband of 49 years, Glenn Rhudy; one son, Eric Rhudy of Damascus, VA; one daughter, Charlotte Phillips and husband, Dwight of Konnarock, VA; two grandsons, Charlton "Evan" Phillips and wife, Ashley of Glade Spring, VA, and Daniel "Zakk" Phillips and wife, Krista of Cherryville, NC; two great-grandsons, Jayme Phillips and Tyler Phillips; three sisters, Rita Fain of Bristol, TN, Brenda Gentry and husband, Edward of Connley Spring, NC, and Pasty Graham and husband, Jimmy of Glade Spring, VA; and several nieces and nephews. The family would like to express a special thank you to all the Doctors, Nurses, and Staff for all the love and care shown to Linda during her illness. The family will receive friends from 5:00 p.m. until 7:00 p.m., Saturday, May 13, 2017 at Garrett Funeral Home, Damascus, VA. Condolences for the family may be sent and viewed by visiting www.garrettfuneralhome.com. Mrs. Rhudy and her family are in the care of Garrett Funeral Home, 203 N. Shady Avenue, Damascus, VA 24236; ph.#: (276) 475-3631.

Linda Lou Rhudy, age 67, of Damascus, Virginia passed away, Wednesday, May 10, 2017 in the Johnston Memorial Hospital, Abingdon, Virginia following an extended illness. She was born in Damascus, Virginia. on December 11, 1949, a daughter of... View Obituary & Service Information

The family of Linda Lou Rhudy created this Life Tributes page to make it easy to share your memories.

Send flowers to the Rhudy family.