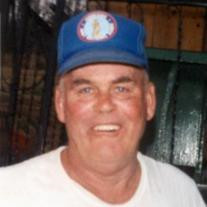 Lihue Gibson, age 76, of Damascus, Virginia passed away on Saturday, November 10, 2012 at Valley Health Care Center in Chilhowie, Virginia. He was a life long resident of Damascus, Virginia and a son of the late James and Ollie Gibson. He was a retired construction worker. He enjoyed hunting and fishing. He is survived by his wife, Wilma Gibson; two daughters, Darlene Rash and her husband, Tom, of Shady Valley, Tennessee, and Linda Lewis of Damascus, Virginia; two sons, Donald Gibson and his wife, Kathy, of Bristol, Tennessee, and Danny Norris and his wife, Mary, of Meadowview, Virginia; one sister, Margaret Murray of Florida; 10 grandchildren, 16 great grandchildren, and several nieces and nephews. The funeral service will be conducted at 6:00 P.M. Monday, November 12, 2012 in the Riverview Chapel at Garrett Funeral Home with Rev. Tracy Puckett officiating. The family will receive friends from 5:00 P.M. to 6:00 P.M. Monday prior to the funeral service at Garrett Funeral Home. The family requests memorial contributions may be sent to the Damascus Volunteer Rescue Squad, P.O. Box 458, Damascus, VA 24236. Online condolences may be sent to the family and a memorial video tribute may be viewed by visiting www.garrettfuneralhome.com. Mr. Gibson and his family are in the care of Garrett Funeral Home, 203 N. Shady Ave., Damascus, VA 24236, ph.#: 276-475-3631.

The family of Lihue Gibson created this Life Tributes page to make it easy to share your memories.

Lihue Gibson, age 76, of Damascus, Virginia passed away on Saturday,...

Send flowers to the Gibson family.