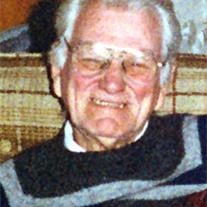 Lesley Walter Le Rendu, age 83, passed away Wednesday, April 22, 2009 in Harpers Ferry, West Virginia at the home of his daughter. He was a native of Ellicott City, Maryland and was a son of the late Lesley J. Le Rendu and Viola Porter Le Rendu.... View Obituary & Service Information

The family of Lesley Le Rendu created this Life Tributes page to make it easy to share your memories.