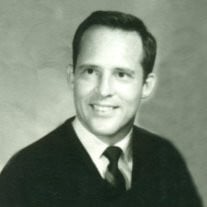 Dr. Leonard Alfred Wingard of Abingdon, Virginia, died at Grace Healthcare of Abingdon on Sunday, August 11, 2013, after an extended illness. He was a son of the late Dr. Samuel Andrew Wingard and Mildred Baker Wingard. In addition to his parents, he was also preceded in death by his son, L.A. Wingard, and a brother, Samuel Baker Wingard. Dr. Wingard was a graduate of Blackburg, Virginia High School, Virginia Tech, and the Medical College of Virginia, Richmond, Virginia. After medical school, he served as a Dentist in the U.S. Army and then continued the practice of Dentistry until his retirement. He is survived by his wife, Grace Cornett Wingard; a grandson, Joseph Taylor “J.T.” Wingard, a daughter-in-law, Sheryl Taylor Widener, a sister-in-law, Lynn Cornett Sweet, all of Abingdon, Virginia; a brother, Richard Moore Wingard and his wife, Jacqueline, of McKinney, Texas; and several nieces and nephews. The funeral service will be conducted at 7:00 P.M. Wednesday, August 14, 2013 in the Riverview Chapel at Garrett Funeral Home with a nephew, Rev. Gary Ritchie, officiating. The committal service and interment will be at 11:00 A.M. Thursday, August 15, 2013 at Sunset Memorial Park in Damascus, Virginia. The family will receive friends from 6:00 P.M. to 7:00 P.M. Wednesday prior to the funeral service at the funeral home. A memorial service will also be held at 2:00 P.M. Sunday, August 18, 2013 at one of Dr. Wingard and J.T.’s favorite fishing spots at 15552 Mendota Road (State Route 802), Abingdon, VA 24210 with Dr. Darrell Bewley, of Grace Point Church in Bristol, TN, officiating. In lieu of flowers, the family requests memorial contributions be sent to Wellmont Hospice House, 280 Steeles Road, Bristol, TN 37620. Online condolences may be sent to the family by visiting www.garrettfuneralhome.com. Dr. Wingard and his family are in the care of Garrett Funeral Home, 203 N. Shady Ave., Damascus, VA 24236, ph.#: 276-475-3631.

Dr. Leonard Alfred Wingard of Abingdon, Virginia, died at Grace Healthcare of Abingdon on Sunday, August 11, 2013, after an extended illness. He was a son of the late Dr. Samuel Andrew Wingard and Mildred Baker Wingard. In addition to his... View Obituary & Service Information

The family of Dr. Leonard Alfred Wingard created this Life Tributes page to make it easy to share your memories.

Send flowers to the Wingard family.