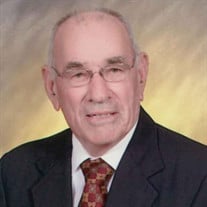 Lawrence Edward Lewis, 95, of Damascus, VA passed away on Friday, December 18, 2020 in the Rehab Center and Memory Care at Bristol. He was born on June 13, 1925, in Konnarock, VA in the Lumber Camp of Hassinger Lumber Company. He was a son of the late James Arthur Lewis and Nana Evelyn Forrester Lewis. In addition to his parents, he was preceded in death by his wife, Margaret Peggy Johnson Lewis, who he was married to for 47 years; three sisters, Charlotte Morrison, Clarice Holmes, and Helen Lewis; and a brother, Wayne Lewis. Lawrence grew up in Taylor Valley, VA. In his junior year of high school he joined the U.S. Navy serving on the USS Regulus in the South Pacific during World War II. He would return to Damascus to graduate high school in 1947 with seven other WW II veterans. Lawrence went on to work for the U.S. Postal Service on the mail trains between Bristol - Washington, D.C. and Abingdon - West Jefferson, NC, which is now the Virginia Creeper Trail. After the RPO service ended he transferred to the Damascus Post Office where he retired from in 1983. After retiring, Lawrence went to work for another 20+ years with Johnson/Garrett Funeral Home. Lawrence served his community as a member of the Damascus Town Council and Vice Mayor. He was a member of the VFW Post 9830 and Damascus American Legion. His greatest service was to his small mountain church as a life long member of Taylor Valley Christian Church, serving as deacon, elder, and church treasurer until his health prevented him from attending. Left to cherish his memory is his daughter, Vickie Sigmon and her husband, Ray, of Bristol, TN; his son, Tony Lewis and his wife, Anita, of Taylor Valley, VA; his brother, George Shirl Lewis and his wife, Joy, of Bristol, TN; a sister-in-law, Joyce Johnson of Damascus, VA; grandchildren, Amanda (Mike) Snead, Nick (Alison) Sigmon, Alex Sigmon, Jennifer (Jonathan) Trentham, and Andrea (Brad) Wann; great grandchildren, Troy, Nattie, Alex, Everett, and Greta; and several nieces and nephews. The family would like to express a special thank you to Lawrence's caregivers over the past few years, Nancy, Teresa, Christine, and Home Nursing Company, Chilhowie, Va. The family will receive friends from 5:00 PM until 6:45 PM Monday, December 21, 2020 at Garrett Funeral Home. The funeral service will follow at 7:00 PM Monday in the Riverview Chapel at Garrett Funeral Home with Mr. Maurice Widener, minister officiating. The service will also be live streamed by visiting Garrett Funeral Home's Facebook page. The committal service and interment will be conducted at 11:00 AM Tuesday, December 22, 2020 at Sunset Memorial Park, Damascus, VA. Due to Covid-19, military rites will be held at a later date. Pallbearers will be his grandsons, Nick Sigmon, Alex Sigmon, and Troy Mullins, and nephews, Rodney Lewis, Joe Holmes, and Terry Lewis. Honorary Pallbearers will be members of Taylor Valley Christian Church. Those who wish to attend the committal service are asked to meet at the cemetery by 10:45 AM Tuesday. In lieu of flowers, the family is requesting that donations be made to Damascus Volunteer Fire Department, P.O. Box 426, Damascus, VA 24236, Damascus Volunteer Rescue Squad, P.O. Box 458, Damascus, VA 24236 or Taylor Valley Christian Church, P.O. Box 1035, Damascus, VA 24236. Condolences for the family may be sent and viewed by visiting www.garrettfuneralhome.com. Mr. Lewis and his family are in the care of Garrett Funeral Home, 203 N. Shady Ave., Damascus, VA 24236; ph.#: (276) 475-3631.

Lawrence Edward Lewis, 95, of Damascus, VA passed away on Friday, December 18, 2020 in the Rehab Center and Memory Care at Bristol. He was born on June 13, 1925, in Konnarock, VA in the Lumber Camp of Hassinger Lumber Company. He was a son... View Obituary & Service Information

The family of Lawrence Edward Lewis created this Life Tributes page to make it easy to share your memories.

Lawrence Edward Lewis, 95, of Damascus, VA passed away on Friday,...