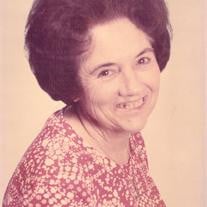 Dateline: Meadowview, Virginia LAVONA R. HURLEY Lavona Rachel Hurley, age 92, of Meadowview, Virginia, went home to be with the Lord on June 16, 2007 at Grace Healthcare of Abingdon. She was born on November 6, 1914, in Washington County, Virginia, and was raised in Damascus. She married and relocated to Manassas Park, Virginia, where she lived for thirty-two years. She was employed and retired from Giant Foods. Mrs. Hurley was the wife of the late Paul W. Hurley. After retirement they moved back to Washington County in the Meadowview area in 1977. She was a member of the Damascus Presbyterian Church. She enjoyed quilting, crocheting, and vegetable and flower gardening. In addition to her husband, Mrs. Hurley was also preceded in death by her parents, W.G. and Sallie Rowland; her sister, Gertrude Wright; and three brothers, Paul Rowland, Charles Rowland, and Avery Willis. She is survived by one son, John Hurley and his wife, Corrine, of Meadowview, Virginia; one daughter, Gretchen Newcomer of Meadowview, Virginia; a special nephew, Wayne Shifflett and his wife, Martha, of Damascus, Virginia; three grandchildren, Danny Pilkington, Johnny Hurley Jr., and Kyra Potts; three great grandchildren, Kevin Ellis, Kalyn Potts, and Wyatt Hurley; and several nieces and nephews. The funeral service will be conducted at 11:00 A. M. Tuesday, June 19, 2007 at the graveside at Sunset Memorial Park with Pastor James Gentry officiating. Friends may visit at Garrett Funeral Home anytime between the hours of 1:00 P.M. to 5:00 P.M. on Monday, June 18, 2007. Condolences may be sent to the family by visiting www.garrettfuneralhome.com or fax condolences to 276-475-5902. Mrs. Hurley and her family are in the care of Garrett Funeral Home, 203 N. Shady Ave., Damascus, VA 24236, 276-475-3631.

The family of Lavona Hurley created this Life Tributes page to make it easy to share your memories.