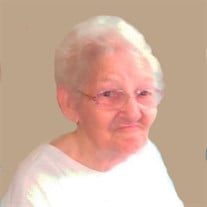 Laura Sullivan, age 91, of Damascus, Virginia passed away on Monday, May 18, 2015 at Johnston Memorial Hospital, Abingdon, Virginia. She was a life long resident of Damascus, Virginia and was the daughter of the late Gordon and Mary Hayden Worley. In addition to her parents, she was also preceded in death by her husband, Howard C. Sullivan; and one brother, Charles Hayden. She was a well-known cook in Damascus and was a member of Green Cove Baptist Church. Mrs. Sullivan is survived by two sons, Billy W. "Hootie" Sullivan of Damascus, Virginia, and James M. "Rabbit" Sullivan and his wife, Sandy, of Damascus, Virginia; two grandchildren, Kaylen Danielle Sullivan and Logan Ross Sullivan; one niece, Thelma Hayden Farmer; and two nephews, Charles Russell Hayden and Alfred Hayden. The funeral service will be conducted at 10:00 am Thursday, May 21, 2015, at the graveside at Mock Cemetery in Damascus, Virginia with Pastor Greg Alderman officiating. Everyone attending is asked to meet at the cemetery by 9:45 am Thursday. In lieu of flowers, the family is requesting that donations be made to Damascus Volunteer Rescue Squad, P.O. Box 458, Damascus, VA 24236 or Damascus Volunteer Fire Department, P.O. Box 426, Damascus, VA 24236. Online condolences for the family may be sent and viewed by visiting www.garrettfuneralhome.com. Mrs. Sullivan and her family are in the care of Garrett Funeral Home, 203 N. Shady Avenue, Damascus, VA 24236; ph.#: (276) 475-3631.

The family of Laura Sullivan created this Life Tributes page to make it easy to share your memories.

Laura Sullivan, age 91, of Damascus, Virginia passed away on...

Send flowers to the Sullivan family.