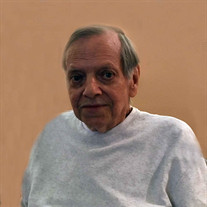 Larry W. Shumate, 76, of Covington, GA passed away on Tuesday, December 12, 2017 at the Remington House Renaissance, Covington, GA following an extended illness. He was born in Laurel Bloomery, TN on July 11, 1941, a son of the late Lawrence W. Shumate and Gladys Fritts Shumate. In addition to his parents, he was preceded in death by his wife, Charla Shumate; and son, Larry W. Shumate, II. He grew up in Damascus, VA and had been a resident of Covington, GA since 1999. He was a veteran of the U.S. Air Force and was an avid Nascar racing fan. Larry is survived by two sisters, Donna Dove of Conyers, GA, and Carol Musser of Land O' Lakes, FL; three nieces, Deanna Grubbs and her husband, Bob, Toni Ecker and her husband, Dave, and Tara Dove-VanWormer and her husband, Dan; and five great nephews and two great nieces. The family will receive friends from 10:00 am until 11:00 am Friday, December 29, 2017 at Garrett Funeral Home. The funeral service will follow at 11:00 am Friday, December 29, 2017, in the Riverview Chapel at Garrett Funeral Home with Pastor Greg Alderman officiating. The committal service and interment will follow at Sunset Memorial Park, Damascus, VA with military graveside rites conducted by the U.S. Air Force Honor Guard and the Highlands Veterans Honor Guard. Pallbearers will be selected from family and friends. In lieu of flowers, the family is requesting that donations be made to a favorite charity of one's choice. Condolences for the family may be sent and viewed by visiting www.garrettfuneralhome.com. Mr. Shumate and his family are in the care of Garrett Funeral Home, 203 N. Shady Ave., Damascus, VA 24236; ph.#: (276) 475-3631.

Larry W. Shumate, 76, of Covington, GA passed away on Tuesday, December 12, 2017 at the Remington House Renaissance, Covington, GA following an extended illness. He was born in Laurel Bloomery, TN on July 11, 1941, a son of the late Lawrence... View Obituary & Service Information

The family of Larry W. Shumate created this Life Tributes page to make it easy to share your memories.

Send flowers to the Shumate family.