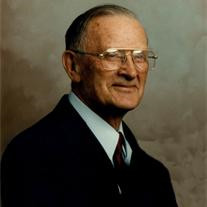 Lacy W. Roberts, age 97, of Alvarado, Virginia, passed away Thursday, February 25, 2010 at Wellmont Hospice House in Bristol, Tennessee. He was a well-known life long resident of the Alvarado community and was the son of the late William and Ida Roberts. He was a farmer and had previously served as a magistrate of the Sullivan County, Tennessee Court. He was of the Southern Baptist faith. In addition to his parents, he was also preceded in death by two sisters, six brothers, one son-in-law, and one great grandson. He is survived by his wife of sixty-nine years, Frances Roberts; three daughters, Jackie Stephenson of Bristol, Tennessee, Carmie Sheffey and her husband, Robert, of Bristol, Virginia, and Sandra Widener and her husband, Eugene, of Damascus, Virginia; two sons, Dr. Wilbert Roberts and his wife, Rebekah, of Bristol, Tennessee, and William “Bill” Roberts and his wife, Mary, of Abingdon, Virginia; 11 grandchildren, 14 great grandchildren, and several nieces and nephews. The funeral service will be conducted at 200 P.M. Saturday, February 27, 2010 in the Riverview Chapel at Garrett Funeral Home with Rev. Walter Statzer officiating. The committal service and interment will follow at Greenwood Cemetery in Alvarado with Rev. Junior Gobble officiating. Pallbearers will be the following grandsons: Dale Price, Jason Price, Robby Price, Joey Price, Kevin Widener, and Kelly Widener. Honorary pallbearers will be Bud Parks, Gene Sweet, Noah Wright, Merle McVey, and Lawrence Dorton. In lieu of flower, the family requests memorial contributions be sent to the Greenwood Cemetery Association, c/o Mr. Ray Smith, 26192 Denton Valley Road, Abingdon, VA 24211. The family would like to extend a special thanks to the 3rd Floor staff at Johnston Memorial Hospital, Dr. Tisdale and staff at Johnston Memorial Cancer Center, and the staff at Wellmont Hospice House. The family will receive friends from 1-2 P.M. Saturday prior to the funeral service at Garrett Funeral Home.   Online condolences may be sent to the family and a memorial video tribute may be viewed by visiting www.garrettfuneralhome.com.  Mr. Roberts and his family are in the care of Garrett Funeral Home, 203 N. Shady Avenue, Damascus, VA 24236, 276-475-3631.

Lacy W. Roberts, age 97, of Alvarado, Virginia, passed away Thursday, February 25, 2010 at Wellmont Hospice House in Bristol, Tennessee. He was a well-known life long resident of the Alvarado community and was the son of the late William and... View Obituary & Service Information

The family of Lacy Roberts created this Life Tributes page to make it easy to share your memories.