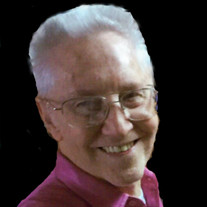 Kermit B. "K.B." Widener, Jr., 74, of Bristol, Tennessee passed away on Monday, October 24, 2016 at Bristol Regional Medical Center, Bristol, Tennessee. He was a native of Washington County, Virginia and was a son of the late Kermit and Hazel Widener. In addition to his parents, he was preceded in death by a brother, Phillip Widener. He was a resident of Bristol, Tennessee for the past 49 years and was a retired technical engineer from Century Link in 2005 after 34 years of service. He was a veteran of the U.S. Army. K.B. enjoyed listening to J. Vernon McGee's sermons and was an avid bowler on the senior bowling league at Interstate Bowl in Bristol, Virginia. He attended Zion United Methodist Church in Damascus, Virginia. He is survived by his loving wife, Lorraine Widener; one daughter, Cindy Widener Carrier; two sons, Daniel Widener and his wife, Melodie, and Kirby Widener and his wife, Michelle; six grandchildren, Grant, Graham, Callie, Ella, Isaac, and Landen; one sister, Nancy Schoffstall and her husband, Ken; three brothers, Don Widener and his wife, Mary Eleanor, Stanley Widener and his wife, Carolyn, and Larry Widener and his wife, Karen; and several nieces, nephews, and cousins. The family will receive friends from 6:00 pm until 8:00 pm Thursday, October 27, 2016 at Garrett Funeral Home and friends may also call at any other times at the family's Widener Valley residence. The funeral service will be conducted at 11:00 am Friday, October 28, 2016, in the Riverview Chapel at Garrett Funeral Home with Pastor Ken Meredith officiating. The committal service and interment will follow at Rush Creek Cemetery in Glade Spring, Virginia. Pallbearers will be selected from nephews and cousins. Honorary Pallbearers will be all his bowling buddies from the Tuesday and Friday Senior Bowling League. In lieu of flowers, the family is requesting that donations be made to Rush Creek Cemetery Fund, c/o Don Widener, 31331 Wright Road, Damascus, VA 24236. Condolences for the family may be sent and viewed by visiting www.garrettfuneralhome.com. Mr. Widener and his family are in the care of Garrett Funeral Home, 203 N. Shady Ave., Damascus, VA 24236; ph.#: (276) 475-3631.

Kermit B. "K.B." Widener, Jr., 74, of Bristol, Tennessee passed away on Monday, October 24, 2016 at Bristol Regional Medical Center, Bristol, Tennessee. He was a native of Washington County, Virginia and was a son of the late Kermit and Hazel... View Obituary & Service Information

The family of Kermit B. "K.B." Widener, Jr. created this Life Tributes page to make it easy to share your memories.