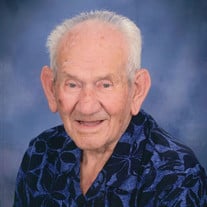 Kenneth "Ken" Gale Upchurch, 90, of Damascus, VA passed away on Tuesday, February 13, 2018 in the James H. Quillen V.A. Medical Center, Mountain Home, TN. He was born in Damascus, VA on July 11, 1927, a son of the late Oscar and Ada Upchurch. In addition to his parents, he was preceded in death by his wife, Mildred "Millie" Upchurch; one granddaughter, Laura Greene; two brothers and two sisters. He left his hometown in 1954 to seek employment in Maryland and Pennsylvania for 30 years prior to moving back to Damascus in 1983. He was a veteran of the U.S. Army during World War II and was stationed in Okinawa, Japan for 11 months. He retired in 1982 as a maintenance supervisor from Weyerhaeuser Corporation. Ken was a member of Damascus Road Baptist Church. He is survived by three daughters, Patricia Wilson of Damascus, VA, Janice Amos and her husband, Jeffrey, of Damascus, VA, and Deborah Winemiller and her husband, Steven, of Stewartstown, PA; six grandchildren, Karen Widener, Stephanie O'Quinn and her husband, Shane, Melissa Lovell, Heather Matson and Scott, Jason Herrell and his wife, Wendy, and Jennifer Thornsberry and her husband, Scott; 11 great grandchildren; and several nieces and nephews. The family will receive friends from 12:00 Noon until 2:00 PM Sunday, February 18, 2018 at Garrett Funeral Home. The funeral service will follow at 2:00 PM Sunday in the Riverview Chapel at Garrett Funeral Home with Rev. John Massey, Jr. officiating. Military rites will be conducted by the U.S. Army National Guard and Highlands Veterans Honor Guard. The committal service will be private. In lieu of flowers, the family is requesting that donations be made to Damascus Road Baptist Church, 18844 Jeb Stuart Hwy., Abingdon, VA 24211. Condolences for the family may be sent and viewed by visiting www.garrettfuneralhome.com. Mr. Upchurch and his family are in the care of Garrett Funeral Home, 203 N. Shady Ave., Damascus, VA 24236; ph.#: (276) 475-3631.

The family of Kenneth "Ken" Gale Upchurch created this Life Tributes page to make it easy to share your memories.

Send flowers to the Upchurch family.