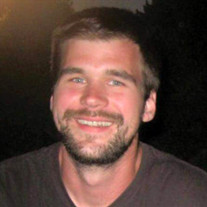 Keith Eric Stolarski (Boone), age 37, of Asheville, North Carolina passed away on Wednesday, January 27, 2016 at his residence in Asheville, North Carolina. He was born in Williamsburg, Virginia and was the son of Bob Boone and Karin Wroten. Eric is survived by his father, Bob Boone and his wife, Lynn, of Abingdon, Virginia; his mother, Karin Wroten of New Port News, Virginia; his fiance, Melinda Butler and her daughter, Althea; five sisters, Azure, Jennifer, Hanna, Rebecca, and Emily; two brothers, Zildjian and Sabian; and his aunt and uncle, Loretta and Paul White. A memorial service will be conducted at a later date. Online condolences for the family may be sent and viewed by visiting www.garrettfuneralhome.com. Eric and his family are in the care of Garrett Funeral Home., 203 N. Shady Ave., Damascus, VA 24236; ph.#: (276) 475-3631.

The family of Keith Eric Stolarski (Boone) created this Life Tributes page to make it easy to share your memories.