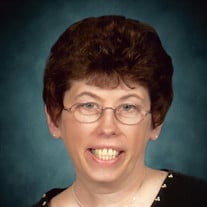 Karen Jane Hand, age 49, of Shady Valley, Tennessee, passed away on Tuesday, March 10, 2015 at Johnston Memorial Hospital in Abingdon, Virginia. She was a native of Washington County, Virginia and had lived in Shady Valley, Tennessee most of her life. She was a daughter of the late Barbara Jane Wright and survived by her father, Charles W. Hand of Shady Valley, Tennessee. She was a 1983 graduate of Holston High School and had attended First Baptist Church and later Sutherland Community Church. In addition to her mother, she was also preceded in death by a sister, Sherry Hand; her maternal grandparents, Walter and Pauline Wright; and her paternal grandfather, Paul Hand. In addition to her father, she is also survived by one sister, Charlotte Hand Ball of Glade Spring, Virginia; her paternal grandmother, Ruby Hand Boone of Damascus, Virginia; one niece, Hope Nash of Chilhowie, Virginia; one nephew, Josh Ball of Marion, Virginia; a special little friend, Peyton Shelly of Damascus, Virginia; and several aunts, uncles, and cousins. The family will receive friends from 6:00 P.M. to 7:45 P.M. Friday, March 13, 2015 at Garrett Funeral Home. The funeral service will follow at 8:00 P.M. Friday in the Riverview Chapel at Garrett Funeral Home with Pastor Dave Allen and Pastor Mack Harr officiating. The committal service and interment will be at 11:00 A.M. Saturday, March 14, 2015 at Sunset Memorial Park in Damascus, Virginia. In lieu of flowers, the family requests memorial contributions be sent to the Myotonic Dystrophy Foundation, 1004-A O’Reilly Avenue, San Francisco, CA 94129. Online condolences may be sent to the family by visiting www.garrettfuneralhome.com. Miss Hand and her family are in the care of Garrett Funeral Home, 203 N. Shady Ave., Damascus, VA 24236, ph.#: 276-475-3631.

The family of Karen Jane Hand created this Life Tributes page to make it easy to share your memories.

Send flowers to the Hand family.