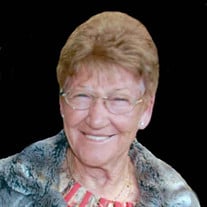 Juanita "Mamaw Weedie" Thompson, 79, of Damascus, VA passed away on Tuesday, September 26, 2017 at her residence. She was born in Washington County, VA on February 8, 1938, a daughter of the late Robert Roland Dunn and Hattie Thelma Blevins Dunn. In addition to her parents, she was preceded in death by her husband, Jerry D. Thompson; one brother, Rance Dunn; two sisters, Eileen Dunn Stewart and Catherine Dunn Vannoy; six brothers-in-law, Carl Thompson and wife, Jane, Ted Thompson and wife, Elaine, John Vannoy, Isaac McCracken, Luther Miller, and Wilton Neely; one sister-in-law, Betty Blackburn and husband, Jack. She was raised in the Extract Community of Damascus, VA. She was a loving and devoted daughter, wife, grandmother, and great grandmother. She was an avid bingo player and formed many friendships along the way. In her heyday, she enjoyed riding motorcycles through the mountains. Mamaw Weedie's house was the gathering place for birthday parties, dinners, and solving the world's problems. Every kid in the neighborhood spent days on end hanging out with the multiple children of the family that mamaw kept and loved as her own. Mamaw always made everyone feel welcome. She was a member of Soul's Harbor in Damascus, VA. Juanita is survived by one daughter, Michelle Stiltner and her husband, Dave, of Abingdon, VA; a "daughter and grandson", Teena Price and Hunter Price of Damascus, VA; one son, Larry Thompson and his wife, Millie, of Damascus, VA; two grandsons, Jacob Heath and his girlfriend, Jesse Reavis, and Justin Thompson and his wife, Kat; one granddaughter, Kristen Watson and her husband, Travis; two great granddaughters, Mia Thompson and Layla Watson; one step grandson, Andrew Stiltner and his wife, Ashley; three brothers, Harold Dunn and his wife, Mary, Edd Dunn and his wife, Irma, and Roland Dunn and his wife, Marty; three sisters, Dixie McCracken, Teen Buckley and Wilma Miller; and several nieces and nephews. The family will receive friends from 6:00 PM until 7:45 PM on Thursday, September 28, 2017 at Garrett Funeral Home. The funeral service will follow at 8:00 PM Thursday in the Riverview Chapel at Garrett Funeral Home with Pastor David Griffin officiating. The committal service and interment will be conducted at 11:00 AM Friday, September 29, 2017 at Sunset Memorial Park in Damascus, VA. Pallbearers will be Jacob Heath, Jack Stewart, Devon Hand, Logan Riendeau, Roy Summey, and Hunter Price. Honorary Pallbearers will be Dave Stiltner, Harold Dunn, Edd Dunn, Roland Dunn, and Stoney Stewart. In lieu of flowers, the family is requesting that donations be made to Penny F. Garrett Sarcoma Foundation, P.O. Box 832, Damascus, VA 24236. The family wants to express a special "Thank You" to Nicki Crossman, Sharon Lester, and Nick May of Mountain States Homecare & Hospice for the special care provided to Juanita and to special caregivers, Teena Price, Hunter Price, Roy Summey, Jacob Heath, and Jesse Reavis. Juanita's family has been blessed beyond measure with all of the prayers, kindness, and love. Condolences for the family may be sent and viewed by visiting www.garrettfuneralhome.com. Mrs. Thompson and her family are in the care of Garrett Funeral Home, 203 N. Shady Ave., Damascus, VA 24236; ph.#: (276) 475-3631.

Juanita "Mamaw Weedie" Thompson, 79, of Damascus, VA passed away on Tuesday, September 26, 2017 at her residence. She was born in Washington County, VA on February 8, 1938, a daughter of the late Robert Roland Dunn and Hattie Thelma Blevins... View Obituary & Service Information

The family of Juanita "Mamaw Weedie" Thompson created this Life Tributes page to make it easy to share your memories.

Send flowers to the Thompson family.