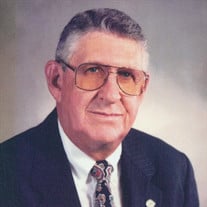 John Bennett Roberts, Sr., age 84, died on Thursday, May 16, 2019 at Johnston Memorial Hospital in Abingdon, VA. He was preceded in death by his parents Bert Alderson Roberts and Lillian Berry Roberts. He is survived by his wife of 60 years Peggy Martin Roberts and four children: Lisa Roberts (Kathy) of Emory, VA; Dr. John B Roberts, Jr. (Reba) of Abingdon, VA; Lynne Roberts Carrier (Randy) of Bristol, VA; and Suzanne Roberts Byerley (Scott) of Mt. Carmel TN. Grandchildren: Samantha Roberts Mitchell (Zac) of Abingdon, VA; Wes Roberts of Abingdon, VA; Celeste Byerley, Drew Byerley and Nicole Byerley of Mt. Carmel, TN He is also survived by two sisters: Peggy Roberts McPherson of Montgomery, AL; Kay Roberts Stout (D.L) of Abingdon, VA and one first cousin: Ann Roberts Minton of Abingdon. He is survived by five nieces, and several great nieces and nephews and great-great nephews and nieces. He was a graduate of Bethel High School, Emory & Henry College, and East Tennessee State University. He was a lifelong educator and passionate supporter of public education. He was a teacher and coach in Washington Count Virginia at Abingdon High School and Liberty Hall High School. He moved into administration as Principal of Liberty Hall High School and was the first Assistant Principal of Holston High School when it opened in 1964. He continued his career as Director of Education at Blue Ridge Job Corp in Marion and then worked as a counselor of the Science and Engineering Division at Virginia Highlands Community College until he retired. Always a champion of the underdog and striving to make life better for all in the community, he was an active civil servant, serving on the Washington County School Board, Washington County Board of Supervisors, IDA Board, Virginia Highlands Community College Board, Washington County Library Board, Board of Department of Social Services and the 4-H Advisory Board. He was a member of the Citizen Club of Damascus and the Democratic Party. He loved his wife, his family, he loved his community and he loved the Lord. John was a member of Bethel Presbyterian Church where he served as Deacon and as Elder. “A hundred years from now it will not matter what my bank account was, the sort of house I lived in, or the kind of car I drove... but the world may be different because I was important in the life of a child. “ Forest E. Witcraft John touched the lives of many and made a difference to many in his community. “I have fought the good fight, I have finished the race, and I have kept the faith.” 2 Timothy 4:7 The family would like to give thanks to the special care given to John by Dr. William Baker, Dr. Mark Davis and the nurses and workers and JMH Cancer Center, Home Health nurse Samantha Wright and caregivers Pam Doss, Eula Grant, Nancy Honaker, Patsy Sexton, and Sharon Smith. The family will receive friends from 6:00 PM to 8:00 PM Monday, May 20, 2019 at Garrett Funeral Home. The funeral service will be conducted at 2:00 PM Tuesday, May 21, 2019 at Bethel Presbyterian Church in Abingdon, VA with Pastor Jim Walker and Pastor Jerry Eggers officiating. The committal service and interment will follow at Bethel Cemetery. Pallbearers will be Wes Roberts, Drew Byerley, Zac Mitchell, Joe Mitchell, Mike Rush, and Russ Martin. Honorary Pallbearers will be Jim Doss, D.L. Stout, and the men of Bethel Presbyterian Church. In lieu of flowers, the family requests memorial donations be sent to Bethel Presbyterian Church, c/o Jean Dunham, 27363 Osceola Road, Abingdon, VA 24211. Condolences for the family may be sent and viewed by visiting www.garrettfuneralhome.com. Mr. Roberts and his family are in the care of Garrett Funeral Home, 203 N. Shady Ave., Damascus, VA 24236; ph.#: 276-475-3631

John Bennett Roberts, Sr., age 84, died on Thursday, May 16, 2019 at Johnston Memorial Hospital in Abingdon, VA. He was preceded in death by his parents Bert Alderson Roberts and Lillian Berry Roberts. He is survived by his wife of 60 years... View Obituary & Service Information

The family of John Bennett Roberts, Sr. created this Life Tributes page to make it easy to share your memories.