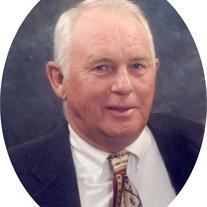 John A. McCall, Jr., age 72, of Meadowview, Virginia passed away on Wednesday, October 4, 2006 at Johnston Memorial Hospital in Abingdon, Virginia. He was born on June 16, 1934, in Washington County, Virginia to the late John A. and Lucile B. McCall. Mr. McCall retired from the Washington County Sheriff's Department after thirty-one years of service during which he served as Sheriff for eight of those years. During his time of service in the Sheriff's Department, he was very active in drug abuse programs in the schools and churches in Washington County for several years. He was instrumental in the formation of the Damascus Little League and was an Elder at Rock Spring Church. Mr. McCall was a farmer in the Lodi Community and was an active sportsman, as one of the highlights of his life occurred on November 18, 2002, opening day of the regular rifle deer season, when John took aim and killed a 34-point buck, unofficially listed as the second largest deer ever killed in the state of Virginia. He is survived by his loving wife of over fifty years, Lenna V. McCall; two daughters, Grace McCall of Meadowview, Virginia, and Jane Brinkman and her husband, Jim, of Meadowview, Virginia; two sons, Andy McCall and his wife, Teri, of Wytheville, Virginia, and Patrick McCall of Washington, D.C.; six grandchildren, Cale Widener, Josh Widener, Neal Reid, Emery Reid and his wife, Cathy, Cassie McCall, and Brandi McCall; two sisters, Alberta Copenhaver and her husband, Earnest, of Meadowview, Virginia and Betty Johnson, of Abingdon, Virginia; seven brothers, William B. McCall and his wife, Sharon, Tom McCall and his wife, Rose, Ed McCall and his wife, Brenda, Jim McCall and his wife, Carolyn, and Sam McCall, all of Meadowview, Virginia, David McCall and his wife, Patty, of Abingdon, Virginia, and Steve McCall and his wife, Betty Gayle, of Glade Spring, Virginia; and several nieces and nephews. A memorial service will be conducted at 11:00 A.M. Friday, October 6, 2006 at the graveside at Sunset Memorial Park in Damascus, Virginia with Rev. Paul B. Jones officiating. The Washington County Sheriff's Office Honor Guard will conduct honor rites at the graveside. Honorary pallbearers will be Bobby Arnold, Roland Dunn, Don McCray, Joe McConnell, Mark McConnell, Alfred Wampler, Billy Hockett, Tom Brabson, and Shirley Heath. In lieu of flowers, the family requests that memorial contributions be sent to the Damascus Volunteer Rescue Squad, P.O. Box 458, Damascus, VA 24236. There will be no viewing or visitation at the funeral home. Condolences may be sent to the family through our website at www.garrettfuneralhome.com. Mr. McCall and his family are in the care of Garrett Funeral Home, 203 N. Shady Ave., Damascus, VA 24236, 276-475-3631.

John A. McCall, Jr., age 72, of Meadowview, Virginia passed away on Wednesday, October 4, 2006 at Johnston Memorial Hospital in Abingdon, Virginia. He was born on June 16, 1934, in Washington County, Virginia to the late John A. and Lucile... View Obituary & Service Information

The family of John McCall, created this Life Tributes page to make it easy to share your memories.

Send flowers to the McCall, family.