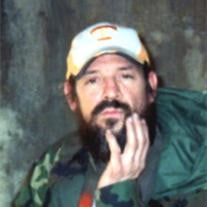 (To view Video Tribute you need a Broadband - DSL or Cable - connection) John Graybeal "Jeff" Wolfe, Jr., age 48, of Damascus, Virginia, was found on Sunday, January 14, 2007 after being missing since November 19, 2006. He was a lifelong resident of Washington County, Virginia and was a 1976 graduate of Holston High School, where he played various sports and was a State Wrestling Champion. He loved the Tennessee Volunteers Football Team and enjoyed riding his bicycle on the Damascus Creeper Trail, it was his sanctuary. He was a machinist for the past thirty years and was a tender soft-hearted person that would do anything for anybody that needed help. He had attended Laurel Community Church, in Damascus, Virginia. He loved all his family and friends and will be missed by all of them. He is survived by his wife, Cynthia Wolfe, of Damascus, Virginia; two sons, Jonathon Brandon Wolfe, of Damascus, Virginia and Jeremy Landon Wolfe, of St. Paul, Virginia; his mother, Gracie Ferguson, of Meadowview, Virginia; his father, John G. Wolfe, Sr., of Glade Spring, Virginia; three brothers, Elijah H. Wolfe and his wife, Jovella, of Glade Spring, Virginia, David O. Wolfe and his wife, Sandy, of Glade Spring, Virginia, and Timothy Wolfe, Sr. and his wife, Kerry, of Damascus, Virginia; one sister, Loretta Shank and her husband, Terry, of Laurel Bloomery, Tennessee; three grandchildren, Zachary Landon Wolfe, Trevor Dylon Wolfe, and Kaylie Hannah Marie Wolfe; and several nieces and nephews. A memorial service will be conducted at 2:00 P.M. Thursday, January 18, 2007, in the Garrett Funeral Home Chapel with Rev. Greg Blackburn officiating. The committal service will follow at Pleasant View Cemetery in Glade Spring, Virginia. The family will receive friends from 12:00 Noon-1:45 P.M. Thursday prior to the memorial service at Garrett Funeral Home. Condolences may be sent to the family and a memorial video tribute may be viewed by visiting www.garrettfuneralhome.com or fax condolences to (276) 475-5902. Mr. Wolfe and his family are in the care of Garrett Funeral Home, 203 N. Shady Avenue, Damascus, VA 24236, (276) 475-3631.

(To view Video Tribute you need a Broadband - DSL or Cable - connection) John Graybeal "Jeff" Wolfe, Jr., age 48, of Damascus, Virginia, was found on Sunday, January 14, 2007 after being missing since November 19, 2006. He was a lifelong resident... View Obituary & Service Information

The family of John Jeff Wolfe, created this Life Tributes page to make it easy to share your memories.