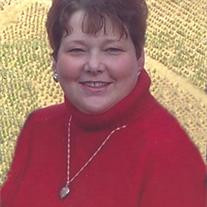 (Must have Broadband Connection to view Video Tribute) Jeanette Blevins Powers, age 49, of Konnarock, Virginia, passed away Wednesday, November 26, 2008 at Wellmont Hospice House in Bristol, Tennessee. She was a native of Washington County, Virginia and had lived in the Konnarock Community for most of her life. She was a daughter of Betty Riffey Blevins of Konnarock, Virginia and of the late Clarence Blevins. Mrs. Powers had worked at BB & T Bank in Damascus, Virginia for twenty-nine years and was an active member of the Azen Baptist Church. In addition to her mother, she is also survived by her husband of twenty-eight years, Keith N. Powers; one son, Kyle B. Powers of the home; one sister, Vickie Sue Stike of Damascus, Virginia; a very special niece, Alanna Buchanan of Damascus, Virginia; a very special nephew, Clay Stike of Damascus, Virginia; two very precious great nieces, Laken and Leah Buchanan; and also survived by other nieces and nephews. The funeral service will be conducted at 8:00 P.M. Friday, November 28, 2008 in the Garrett Funeral Home Chapel with Pastor Tim Blevins and Pastor Ronnie Blevins officiating. The committal service and interment will be at 10:00 A.M. Saturday, November 29, 2008 at Azen Cemetery in Konnarock, Virginia. Pallbearers will be Kevin Anderson, Kelly Powers Jr., Robert Blevins, James Waddell, Craig Milhorne, and Larry Gentry. Honorary pallbearers will be Ben Hayes, Bobby Fain, Lawrence Blevins, Ira Blevins, Gary Blevins, and Kelly Powers. The family would like to extend a special thanks to all of Jeanette’s health care providers and especially all her friends and staff members of BB & T Bank and to all the loyal customers from the bank for all their prayers and support during her time of illness. The family will receive friends from 6:00 P.M. to 7:45 P.M. Friday prior to the funeral service at Garrett Funeral Home or at any other times at the home of her niece, Alanna Buchanan, 33460 Widener Valley Road, Damascus, VA 24236. Online condolences may be sent and viewed by visiting www.garrettfuneralhome.com.  Mrs. Powers and her family are in the care of Garrett Funeral Home, 203 N. Shady Avenue, Damascus, VA 24236, 276-475-3631.

The family of Jeanette Powers created this Life Tributes page to make it easy to share your memories.

(Must have Broadband Connection to view Video Tribute) Jeanette...

Send flowers to the Powers family.