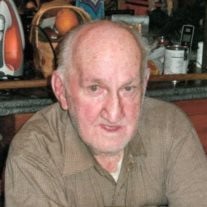 James Curley Vannoy, age 92, of Damascus, Virginia passed away on Sunday, March 30, 2014 at Johnston Memorial Hospital in Abingdon, Virginia. He was a lifelong resident of Washington County, Virginia and was a son of the late Alex and Flosie Vannoy. He was a veteran of the U.S. Army during World War II where he received five Combat Stars, one Unit Citation, and one Bronze Arrowhead. Mr. Vannoy was a retired truck driver from V.D.O.T. after 34 years of service and was a member of Faith Baptist Church. In addition to his parents, he was also preceded in death by one brother, Dan; and two sisters, Louise and Hazel. He is survived by his wife, Dorothy I. Vannoy; two sons, Terry Vannoy and his wife, Linda, of Bristol, Tennessee and Mike Vannoy and his fiancé, Ramona, of Damascus, Virginia; one daughter, Charlene Richardson and her husband, Maynard, of Damascus, Virginia; one granddaughter, Ashley Bise and her fiancé, Nick; one brother, Paul Vannoy and his wife, Helen, of Bristol, Tennessee; three sisters, Virginia Stroup of Damascus, Virginia, Blanche Hill and Irene Parks, both of Abingdon, Virginia; and several nieces and nephews. The funeral service will be conducted at 2:00 P.M. Wednesday, April 2, 2014 in the Riverview Chapel at Garrett Funeral Home with Pastor Robert Griffin, Jr. officiating. The committal service and interment will follow at Sunset Memorial Park in Damascus, Virginia. The Highlands Veterans Honor Guard and Virginia National Guard Honor Guard will conduct military graveside rites. Pallbearers will be Bill Denton, Bobby Stroup, Robert Vannoy, Ford Richardson, Fred Richardson, and Willie Trivett. Honorary pallbearers will be Ben Hayes, Terry Taylor, Eddie Vannoy, Breese Allen Dolinger, and Johnny Denton. The family will receive friends from 6:00 P.M. to 8:00 P.M. Tuesday, April 1, 2014 at Garrett Funeral Home. Online condolences may be sent to the family by visiting www.garrettfuneralhome.com. Mr. Vannoy and his family are in the care of Garrett Funeral Home, 203 N. Shady Ave., Damascus, VA 24236, ph.#: 276-475-3631.

James Curley Vannoy, age 92, of Damascus, Virginia passed away on Sunday, March 30, 2014 at Johnston Memorial Hospital in Abingdon, Virginia. He was a lifelong resident of Washington County, Virginia and was a son of the late Alex and Flosie... View Obituary & Service Information

The family of James Curley Vannoy created this Life Tributes page to make it easy to share your memories.

Send flowers to the Vannoy family.