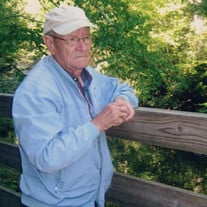 James "Pinhead" McGlamery , 96, of 851 Frost Lane, Damascus, Virginia passed away, on Sunday, July 28, 2019 at his residence in Damascus, VA. He was born in War, WV on October 12, 1922, a son of the late Leroy R. and Cordia Alice McGlamery. In addition to his parents, he was preceded in death by his wife, Ada Elizabeth Woods McGlamery; one grandson, Sonny Wayne Reed; and several other sisters and brothers. "Pinhead" was a resident of Damascus for several years. He formerly worked for Bristol Door and Lumber, Lincoln Industries and Mobay Chemical Company. He had a love for mowing yards and was best know for mowing yards all through Damascus for many years. He loved to stay busy. He enjoyed hunting and fishing. He was a longtime Member and Elder of the Damascus Church of Christ on Railroad Ave., Damascus, VA. Pinhead is survived by one daughter, Barbara McGlamery of Damascus, VA; two sons, Tommy McGlamery and wife, Marie of Abingdon, VA and Johnny McGlamery of Damascus, VA; grandchildren, Chadwick McGlamery, Aaron McGlamery and Caitlin Quiggin and husband, Patrick; great grandchildren, Alyssa and Jordan Quiggin and several other great grandchildren; one sister, Mildred Blackburn of Damascus, VA; special pet, Sunshine Sunny Day; very-very special friends, Roger Milhorne, Thelma Wright, Debbie Reed, Tommy Rowley and Jessie Lou Freeman and families; and several nieces and nephews. The family would like to express a special thank you to the Gen. Mgr. Greg Cunningham and the associates of the Exit 7 Walmart and to the staff of the Golden Corral in Bristol, VA for all the love and care shown to Pinhead over the years. Graveside Services will be held on 2:00 p.m. on Thursday, August 1, 2019 in Sunset Memorial Gardens, Damascus, VA with Pastor Walter Staude and Pastor Harley Farmer officiating. Everyone is asked to meet at the cemetery at 1:45 p.m. Thursday. In lieu of flowers, the family is requesting that donations be made to the Penny F. Garrett Sarcoma Foundation, P.O. Box 832, Damascus, VA 24236 or the Margaret B. Mitchell Spay/Neuter Clinic, 16222 Lee Hwy., Bristol, VA 24202. Condolences for the family may be sent and viewed by visiting www.garrettfuneralhome.com. Mr. McGlamery and his family are in the care of Garrett Funeral Home, 203 N. Shady Ave., Damascus, VA 24236; ph.#: (276) 475-3631.

The family of James "Pinhead" McGlamery created this Life Tributes page to make it easy to share your memories.

Send flowers to the McGlamery family.