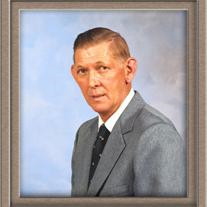 (To view Video Tribute you need a Broadband - DSL or Cable - connection) James L. "Jim" Boone, Sr., age 83, of Damascus, Virginia, went to be with the Lord on Saturday, December 30, 2006, surrounded by the love of his ten children, thirteen grandchildren, fourteen great grandchildren, and the care of the doctors, nurses, and staff of Johnston Memorial Hospital in Abingdon, Virginia. Mr. Boone fought a courageous battle with a brief illness. He was born in Mercer County, West Virginia, to the late Virginia Boone Roe and lived his entire life in the Damascus area. He attended the Damascus Church of Christ where he was very active. He was retired in 1989 from Columbus McKinnon Hoist Division in Damascus. Mr. Boone was preceded in death by his first wife, Elizabeth Parris Boone, and his second wife, Willa Mae Long Boone, and his step-father, Mr. Berth Roe. He is survived by seven daughters, Peggy Gilley and her husband, Jack, and Eula Widener and her husband, Jerry, all of Damascus, Virginia; Brenda Morrison and her husband, Dean, Judy Grimsley and her husband, Keith, and Diane Grimsley and her husband, Kyle, all of Meadowview, Virginia, Mae Fritz and her husband, R.C., and Jean Moretz and her husband, Wayne, all of Abingdon, Virginia; three sons, James L. Boone, Jr. and his wife, Mary, of Kingsport, Tennessee, Danny Boone and his wife, Birdie, of Meadowview, Virginia, and Bobby Boone and his wife, Brenda, of Abingdon, Virginia; two sisters, Lucille Forrester and Esther Murphy, both of Damascus, Virginia; thirteen grandchildren, fourteen great grandchildren, and several nieces and nephews. The funeral service will be conducted at 2:00 P.M. Tuesday, January 2, 2007, in the Garrett Funeral Home Chapel with Mr. Bill Reece, Rev. Mike Bowers, and Mr. Jeff Fritz officiating. The committal service and interment will follow at Sunset Memorial Park in Damascus. Pallbearers will be the following grandsons: Jeff Fritz, Chris Moretz, David Morrison, Lynn Widener, Tim Widener, Josh Boone, and Michael Hand. Honorary pallbearers will be Jack DeBusk, Donnie Foster, and members of his Sunday school class at the Damascus Church of Christ. Flowers will be accepted or memorial contributions may be sent to the Damascus Church of Christ, c/o Mr. Bill Reece, 664 Highway 67N, Trade, TN 37697 or to the American Diabetes Association, 900 E. Hill Avenue, Suite 240, Knoxville, TN 37915. The family will receive friends from 6-9 P.M. Monday, January 1, 2007, at Garrett Funeral Home or at any time at the residence. Condolences may be sent to the family and a memorial video tribute may be viewed by visiting www.garrettfuneralhome.com or fax condolences to (276) 475-5902. Mr. Boone and his family are in the care of Garrett Funeral Home, 203 N. Shady Ave., Damascus, VA 24236, (276)-475-3631.

(To view Video Tribute you need a Broadband - DSL or Cable - connection) James L. "Jim" Boone, Sr., age 83, of Damascus, Virginia, went to be with the Lord on Saturday, December 30, 2006, surrounded by the love of his ten children, thirteen... View Obituary & Service Information

The family of James Jim Boone created this Life Tributes page to make it easy to share your memories.