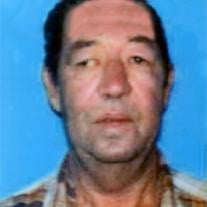 James Edward “Bud” Smith, age 67, of the Alvarado Community in Abingdon, Virginia, passed away on Saturday, January 29, 2011 at Johnston Memorial Hospital in Abingdon, Virginia. He was a native of Washington County, Virginia and had lived in Johnson City, Tennessee for several years prior to moving back to the Alvarado Community for the past two years. He was a son of the late Harold and Lillian Smith. He was of the Baptist Faith. In addition to his parents, he was also preceded in death by two sons, Charles Edward “Shorty” Smith and Jimmy Eugene Smith; and two brothers, John Smith and Garnett Smith.  He is survived by one daughter, Kathy Dudgeon and her husband, Kenny, of Falls of Rough, Kentucky; two grandchildren, Tyler Dudgeon and Tayler Dudgeon; three sisters, Ruby Shelton of Johnson City, Tennessee, Juanita Morefield and Betty Howard, both of Laurel Bloomery, Tennessee; two brothers, Tommy Smith of Damascus, Virginia and Junior Smith of Johnson City, Tennessee; a special friend, Sylvia Smith of Jonesborough, Tennessee; and several nieces and nephews.  The funeral service will be conducted at 8:00 P.M. Wednesday, February 2, 2011 in the Riverview Chapel at Garrett Funeral Home with Rev. Billy Hawkins officiating. Honorary pallbearers will be Johnny Howard, Joe Crosswhite, Jerry Grubb, Kenny Dudgeon, Larry Campbell, and Jeff Neal. The family will receive friends from 6:00 P.M. to 7:45 P.M. Wednesday prior to the funeral service at the funeral home. The committal service and interment will be at 2:00 P.M. Thursday, February 3, 2011 at Bethel Cemetery in Abingdon, Virginia.  Online condolences may be sent to the family and a memorial video tribute may be viewed by visiting www.garrettfuneralhome.com.  Mr. Smith and his family are in the care of Garrett Funeral Home, 203 N. Shady Avenue, Damascus, VA 24236, 276-475-3631.

James Edward “Bud” Smith, age 67, of the Alvarado Community in Abingdon, Virginia, passed away on Saturday, January 29, 2011 at Johnston Memorial Hospital in Abingdon, Virginia. He was a native of Washington County, Virginia and had lived in... View Obituary & Service Information

The family of James "Bud" Smith created this Life Tributes page to make it easy to share your memories.

James Edward “Bud” Smith, age 67, of the Alvarado Community in...