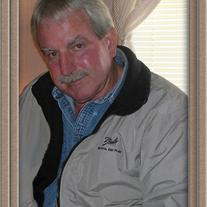 (To view Video Tribute you need a Broadband - DSL or Cable - connection) James A. "Bud" Hand, age 63, of the Sutherland Community, passed away on Saturday, November 11, 2006 at his residence. He was a life long resident of the Sutherland Community and was retired from the Ball Corporation. He enjoyed working as a shuttle van driver for Sundog Outfitters in Damascus. Mr. Hand is the son of Ruby E. Boone of Damascus, Virginia, and was preceded in death by his wife, Mary Hand, his father, Paul Hand, and two brothers, Dennis Hand and Larry Hand. In addition to his mother, he is also survived by one daughter, Donna Hutchins, of Damascus, Virginia; one son, Duane Hand and his wife, Kim, of Damascus, Virginia; two sisters, Linda Hayes and her husband, Jerry, of Abingdon, Virginia, and Connie Meredith and her husband, Glenn, of Highpoint, North Carolina; one brother, Charles Hand, of the Sutherland Community, Tennessee; a special friend, Cindy Hyder of Mountain City, Tennessee; six grandchildren, one great grandson, and several nieces and nephews. The funeral service will be conducted at 8:00 P.M. Monday, November 13, 2006, in the Garrett Funeral Home Chapel with Pastor Robert W. Griffin, Jr. officiating. The committal service and interment will be at 11:00 A.M. Tuesday, November 14, 2006, at Sunset Memorial Park in Damascus, Virginia. Pallbearers will be Chris Manuel, Marty Manuel, Chad McGlamery, Aaron McGlamery, Lynn Campbell, and Lewis Hand. In lieu of flowers, the family requests that memorial contributions be sent to the Damascus Volunteer Rescue Squad, P.O. Box 458, Damascus, VA 24236. The family will receive friends from 6 - 7:45 P.M. Monday, November 13, 2006, prior to the funeral service at Garrett Funeral Home in Damascus, Virginia, or at any time at his mother's, Ruby Boone, residence. Condolences may be sent to the family and a memorial video tribute may be viewed by visiting www.garrettfuneralhome.com or you may fax condolences to 276-475-5902. Mr. Hand and his family are in the care of Garrett Funeral Home, 203 N. Shady Ave., Damascus, VA 24236, 276-475-3631.

The family of James Bud Hand created this Life Tributes page to make it easy to share your memories.