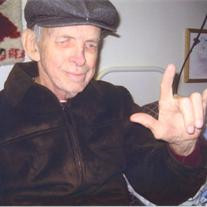 (Must have Broadband Connection to view Video Tribute) Jackie Miller Wright, age 73 of Westerville, Ohio passed away on Thursday, June 7, 2007 at Columbus Colony Elderly Care in Westerville, Ohio. He was a native of Washington County, Virginia and had lived in Virginia and Maryland for several years before moving to Westerville, Ohio in May 2006. He was a son of the late Charles H. Wright, Sr. and Ruth Sheffield Wright. Mr. Wright was the first President of the MWADB (Metropolitan Washington Association of the Deaf-Blind) in 1984 organizing guest speakers, support group meetings, fundraising, camping, picnics and various dinner gatherings. He filed a Federal Lawsuit in December 1994 for disability discrimination. He won an 'apartment-for-life' settlement representing the largest fair housing settlement to date in the nation. He was elected 'Deaf-Blind Person of the Year' in November 2005. In addition to his parents, he was also preceded in death by two brothers, William Buford Wright and Charles Wright. He is survived by two daughters, Suzanna Wright Atkins, of Stem, North Carolina and Reena Wright, of Maryland; two sons, Matthew Miller Wright, of Cedar Grove, North Carolina and Haran Wright, of Maryland; two sisters, Louise Lindsey, of Bluefield, West Virginia and Margaret Click, of Mountain City, Tennessee; two brothers, Ralph Wright, of Kingsport, Tennessee, and Richard Wright, of Abingdon, Virginia; three grandchildren; Christina Huss, Ashleigh Wright, and Matthew Wright, Jr.; and several nieces and nephews. The funeral service will be conducted at 8:00 P. M. Tuesday, June 12, 2007 in the Garrett Funeral Home Chapel with Rev. Leonard Smith officiating. The committal service and interment will be at 11:00 A. M. Wednesday, June 13, 2007 at Zion Cemetery in Damascus, Virginia. The family will receive friends from 6:00 P. M. to 7:45 P. M. Tuesday prior to the funeral service at Garrett Funeral Home. Condolences may be sent to the family and a video memorial tribute may be viewed by visiting www.garrettfuneralhome.com or fax condolences to 276-475-5902. Mr. Wright and his family are in the care of Garrett Funeral Home, 203 N. Shady Ave., Damascus, VA 24236, 276-475-3631.

(Must have Broadband Connection to view Video Tribute) Jackie Miller Wright, age 73 of Westerville, Ohio passed away on Thursday, June 7, 2007 at Columbus Colony Elderly Care in Westerville, Ohio. He was a native of Washington County, Virginia... View Obituary & Service Information

The family of Jackie Wright created this Life Tributes page to make it easy to share your memories.

(Must have Broadband Connection to view Video Tribute) Jackie...

Send flowers to the Wright family.