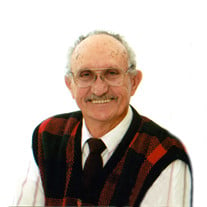 Jackie N. “Hopper” Johnson, age 83, of Damascus, Virginia passed away on Saturday, April 12, 2014 at Johnston Memorial Hospital in Abingdon, Virginia. He was a life long resident of Damascus, Virginia and was the son of the late Fred and Minnie Johnson. He retired from Sprint Telephone System as an Installation Supervisor after 30 years of service. After his retirement, he drove a school bus for the Washington County, Virginia School System, where he enjoyed all the special trips transporting the Holston High School athletic teams to their games on a regular basis. He was a life member of the Damascus Volunteer Fire Department. Hopper was an avid fly fisherman and was well known for the art of tying his own fishing flies for trout fishing. He also enjoyed building and flying model airplanes and was a member of the American Modelers Association. Most of all, he enjoyed spending time with and bragging on his two grandsons. He was a member of the First Baptist Church, where he formerly served as a deacon and Sunday school teacher. In addition to his parents, he was also preceded in death by three brothers, Paul Johnson, Jim Johnson, and Howard “Bunton” Johnson; and a sister, Margaret “Peg” Lewis. He is survived by his loving wife of 53 years, Joyce Fraley Johnson; one daughter, Grace Johnson Doss and her husband, Steve, of Glade Spring, Virginia; two special grandsons, Michael Doss and his wife, Holly, of Kingsport, Tennessee and Jeffrey Doss of Glade Spring, Virginia; two special nieces, Melinda Blandford and her husband, Neal, of Lonoke, Arkansas and Amanda Hooper and her husband, Houston, of Houston, Texas; and several other nieces and nephews. The funeral service will be conducted at 2:00 P.M. Wednesday, April 16, 2014 in the Riverview Chapel at Garrett Funeral Home with Bro. Buster Mullins officiating. The committal service and interment will follow at Sunset Memorial Park in Damascus, Virginia. Pallbearers will be Houston Hooper, Sidney Parker, Tom McGlamery, Bobby Doss, David Doss, William Doss, Danny Thomas, and Glenn David Triplett. Honorary pallbearers will be Jim Bishop, Johnny Wilcox, Tom McConnell, Fred Buckles, and Tony McFadden. In lieu of flowers, the family requests memorial contributions be sent to the Damascus Volunteer Fire Department, P.O. Box 426, Damascus, VA 24236. The family will receive friends from 6:00 P.M. to 8:00 P.M. Tuesday, April 15, 2014 at Garrett Funeral Home. Online condolences may be sent to the family and a memorial tribute may be viewed by visiting www.garrettfuneralhome.com. Mr. Johnson and his family are in the care of Garrett Funeral Home, 203 N. Shady Ave., Damascus, VA 24236, ph.#: 276-475-3631.

The family of Jackie N. "Hopper" Johnson created this Life Tributes page to make it easy to share your memories.

Send flowers to the Johnson family.