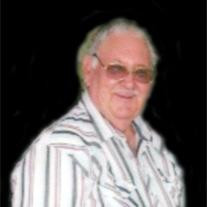 Jack W. Moorefield, age 80, of High Point, North Carolina, passed away Wednesday, October 20 2010 at Hospice House of High Point in High Point, North Carolina. He was a native of Washington County, Virginia and had lived in High Point, North Carolina since 1949. He was a son of the late Emmett and Sophia Dickerson Moorefield. He was a veteran of the U.S. Army during the Korean Conflict. He is survived by six sisters, Roxie Williams, Gladys Phillips, Ella Mae Owens, Sylvia Lee Widener and her husband, Marvin, Ruby Owens, and Helen Owens; three brothers, Emmett Moorefield Jr., Burley Morefield, and Kenneth Moorefield and his wife, Kay; and several nieces and nephews. The funeral service will be conducted at 1:00 PM Friday, October 22, 2010 at the graveside at Sunset Memorial Park in Damascus, Virginia with Mr. Everette Morefield officiating. Military graveside rites will be conducted by the Highlands Fellowship Veterans Honor Guard. The family will receive friends from 7:00 PM to 9:00 PM Thursday, October 21, 2010 at Garrett Funeral Home. Online condolences may be sent to the family and viewed by visiting www.garrettfuneralhome.com.  Mr. Moorefield and his family are in the care of Garrett Funeral Home, 203 N. Shady Avenue, Damascus, VA 24236, 276-475-3631.

The family of Jack Moorefield created this Life Tributes page to make it easy to share your memories.

Send flowers to the Moorefield family.