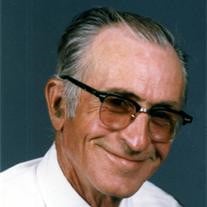 (To view Video Tribute you need a Broadband - DSL or Cable - connection)Jack Huffman, age 73, of Konnarock, Virginia, passed away Saturday, May 20, 2006 at his residence. He was a life long resident of Washington County, Virginia and was the son of the late William and Dulcie Huffman. He was a veteran of the U.S. Air Force during the Korean Conflict and was a carpenter. He was a member of the United Brotherhood of Carpenters and Joiners of America and a longtime member of the Mount Rogers Fire and Rescue Squad. Mr. Huffman enjoyed traveling to Florida and going fishing. He is survived by his wife, Joan S. Huffman; two daughters, Karen Blevins, of Whitetop, Virginia, and Debbie Eller and her husband, Jimmy, of Konnarock, Virginia; two grandchildren, Jayson Blackburn and Mindy Blackburn; two great grandchildren, Sierra Blackburn and Brandy Blackburn; five sisters, Ella Mae Taylor and Vivian Adams, both of Troutdale, Virginia, Bernice Priest, of Gauley Bridge, West Virginia, Naomi Boone, of Konnarock, Virginia, and Peggy Steele, of Boone, North Carolina; one brother, Ernest Huffman, of Damascus, Virginia; and several nieces and nephews. The funeral service will be conducted at 8:00 P.M. Monday, May 22, 2006, in the Konnarock Seventh-Day Adventist Church with Pastor Jim Cox officiating. The committal service and interment will be at 10:00 A.M. Tuesday, May 23, 2006, at Azen Cemetery in Konnarock, Virginia, with Pastor Ralph Reedy officiating. The family would like to extend a special thanks to the Hospice of Southwest Virginia for all the special care given to Mr. Huffman during his illness. The family will receive friends from 6-7:45 P.M. Monday prior to the funeral service at the church. Condolences may be sent to the family and a video memorial tribute may be viewed at www.garrettfuneralhome.com. Mr. Huffman and his family are in the care of Garrett Funeral Home, 203 N. Shady Ave., Damascus, VA 24236, 276-475-3631.

(To view Video Tribute you need a Broadband - DSL or Cable - connection)Jack Huffman, age 73, of Konnarock, Virginia, passed away Saturday, May 20, 2006 at his residence. He was a life long resident of Washington County, Virginia and was the... View Obituary & Service Information

The family of Jack Huffman created this Life Tributes page to make it easy to share your memories.