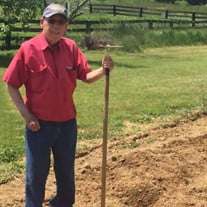 Jack S. "Hammer" Dennison, 82, of Bristol, VA passed away on Friday, May 19, 2017 in the Johnston Memorial Hospital, Abingdon, VA following an extended illness. He was born in Damascus, VA and was a son of the late Blaine and Letha Dennison. In addition to his parents, he was preceded in death by a nephew, Eric Dennison. He was a resident of Bristol, VA for most of his life and was a veteran of the U.S. Air Force. He received his Master's Degree from E.T.S.U. and had taught classes at King University in Bristol, TN and Virginia Highlands Community College in Abingdon, VA. Jack had worked at Dominion Bank in Bristol, VA and later at Ball Brothers Furniture Company in Blountville, TN. He then started his own accounting business, Jack Dennison Account (J.D.A.) Services, in Bristol, VA where he worked for forty years. He was a member of the Bristol Civitan Club, Bristol Chamber of Commerce, and the V.F.W. Jack enjoyed horse trading, farming, and especially socializing with people. He never met a stranger. Jack is survived by his loving wife of 55 years, June Dennison; one brother, William "Bill" Dennison and his daughter, Jane; and his aunt, Clementine "Clem" Evans. Jack had many friends and was a friend to many! The family will have a time of remembrance with the gathering of friends from 1:00 PM until 2:00 PM Saturday, May 27, 2017 at Garrett Funeral Home. A celebration graveside service will then follow at Sunset Memorial Park in Damascus, VA with Pastor David Griffin officiating. Those who wish to attend the graveside service are asked to meet at the funeral home by 1:45 PM on Saturday, May 27, 2017 to go in procession to the cemetery. In lieu of flowers, the family is requesting that donations be made to charity of one's choice. Online condolences for the family may be sent and viewed by visiting www.garrettfuneralhome.com. Mr. Dennison and his family are in the care of Garrett Funeral Home, 203 N. Shady Ave., Damascus, VA 24236; ph.#: (276) 475-3631.

Jack S. "Hammer" Dennison, 82, of Bristol, VA passed away on Friday, May 19, 2017 in the Johnston Memorial Hospital, Abingdon, VA following an extended illness. He was born in Damascus, VA and was a son of the late Blaine and Letha Dennison.... View Obituary & Service Information

The family of Jack S. "Hammer" Dennison created this Life Tributes page to make it easy to share your memories.

Send flowers to the Dennison family.