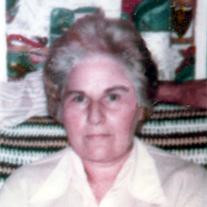 Irene Winters Morefield, age 79, of Damascus, Virginia, passed away on Friday, August 17, 2007 at Johnston Memorial Hospital in Abingdon, Virginia. She was a native of Damascus, Virginia, and was the daughter of the late Charles Henley Winters and Rebecca Michaels Winters. She was a member of the Damascus Church of Christ and was preceded in death by two brothers, Tom Winters and Omar Winters; and one sister, Sophia Heath. She is survived by her husband of sixty years, David C. Morefield; three sons, Charles R. Morefield and his wife, Doris, of Glade Spring, Virginia, David G. Morefield and Wayne L. Morefield and his wife, Vickie, all of Damascus, Virginia; one sister, Faye Thompson, of Bristol, Tennessee; three grandchildren, David Wayne Morefield, of Damascus, Virginia, and Bobby Lewis Blevins and Patricia Sue Smith, both of Glade Spring, Virginia; five great grandchildren and several nieces and nephews. The funeral service will be conducted at 11:00 A.M. Monday, August 20, 2007 at the graveside at Sunset Memorial Park in Damascus, Virginia, with Mr. Bill Reece, minister officiating. The family will receive friends from 7-9 P. M. Sunday, August 19, 2007 at Garrett Funeral Home. Condolences may be sent to the family by visiting www.garrettfuneralhome.com or you may fax condolences to 276-475-5902. Mrs. Morefield and her family are in the care of Garrett Funeral Home, 203 N. Shady Ave., Damascus, VA 24236, (276) 475-3631.

The family of Irene Morefield created this Life Tributes page to make it easy to share your memories.