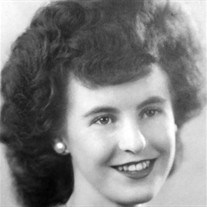 Irene Maxfield Combs, age 89, of Rock Hill, South Carolina and formerly of Damascus, Virginia passed away peacefully on Wednesday, January 20, 2016 at the Community Hospice House in Rock Hill, South Carolina. Irene was born on March 29, 1926 in Russell County, Virginia to the late Paris and Bertha Maxfield. Irene graduated from Laramie High School in Wyoming; even many years later, she loved attending her class reunions--she often won the award for traveling the furthest to attend. She also enjoyed participating in Rodeo Days while visiting her family in Wyoming. No one looked cuter in a cowboy hat than Irene. After Irene graduated from high school she traveled to Nashville with the intent of enrolling in nursing school, but instead she met and fell in love with Clyde Combs, and happily married him instead. Clyde and Irene were married in Virginia in 1945. She dedicated her life to making a wonderful home for her family; she was the epitome of Southern hospitality, making sure everyone who entered her home felt welcomed, well fed, and loved. Clyde and Irene spent many of their retirement years in Florida, where they enjoyed boating, fishing, and feeding the neighborhood birds. Clyde proceeded his bride in death after 64 years of marriage. Other beloved family members who passed away prior to Irene include her great-granddaughter Madison Goodnight, brothers Jay and Guy Maxfield, sisters Mary Moulton and Louella Maxfield, and her parents, Paris and Bertha Maxfield. She is survived by her daughter, son and their spouses: Joyce and Jim Wyatt, and Jimmy and Gail Combs. She is also survived by 5 grandchildren and their spouses: Shauna and Matt Sigmon, Summer and Trey Howdy, Amy and Chris Myers, Christy and Jay Goodnight, and Greg and Angela Combs. These 5 marriages produced 21 great-grandchildren: Gabrielle, Grace, Caleb, Abraham and Mabry Sigmon; Annabelle, Ward, Sullivan, and Ellie Gray Howdy; Matthew, Emma, Abby, Hanna, Will and Olivia Myers; Jack, Nick, Luke, and the late Madison Goodnight; and Avery and Brady Combs. Other surviving family members include sister Louise Peele, sister-in-law Theda White, and many nieces and nephews. The family will receive friends from 12:30-2:00 pm Friday, January 22, 2016, immediately followed by the Celebration of Life service at 2:00 pm; both will be held in the Riverview Chapel at Garrett Funeral Home, located at 203 North Shady Avenue in Damascus, Virginia. After the service, the committal service and entombment will commence in the Colonial Chapel Mausoleum at Forest Hills Memory Gardens, located at 19415 Lee Highway, in Abingdon, Virginia. In lieu of flowers, donations may be made in Irene's name to Rock Hill Dream Center, P.O. Box 12438, Rock Hill, SC 29731 or Community Hospice House, P.O. Box 993, Rock Hill, SC 29732. Online condolences for the family may be sent and viewed by visiting www.garrettfuneralhome.com. Mrs. Combs and her family are in the care of Garrett Funeral Home; ph.#: (276) 475-3631.

The family of Irene Maxfield Combs created this Life Tributes page to make it easy to share your memories.

Send flowers to the Combs family.