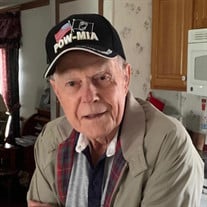 TSgt Ira Cebert Carter, 94, of Damascus, VA passed away on Thursday, February 10, 2022 in The Waters of Bristol Nursing Home in Blountville, TN. He was born in Tamcliff, WV on September 3, 1927, a son of the late Estell and Adline Cline Carter. In addition to his parents, he was preceded in death by wife, Anna Lee Cook Carter; a daughter, Lee Ann Ward; and a sister, Cassandra Sue Carter. Ira loved his country and proudly served in the U.S. Air Force from 1946 to 1966. He was POW in Korea from Feb 12, 1951 until Sept 2, 1953. During his military career he had lived in Italy from 1960 to 1964. After his retirement from service in 1966, he moved to Roanoke, VA where he lived until 1986. He was a truck driver and owned and operated two service stations while in Roanoke. In 1986, he and his wife purchased an RV and traveled all over the country for many years before moving to Damascus, VA in 2002. They stayed in South Padre Island, TX during the winter months with his brother, Teddy and his wife, Blonnie. In his spare time, Ira loved to Saltwater fish. Ira is survived by one son, Steven Carter and his wife, Donna, of Lebanon, VA; two grandsons, Jonathan Matthew Carter of Bristol, TN and Matthew Hollaway of Okalhoma City, OK; one granddaughter, Diana Guinn of Chattanooga, TN; one great grandson, Carter Guinn; one brother, Teddy Carter of Gilbert, WV; and one cousin, Truby Abbott; and several nieces and nephews. The family would like to express a special thank you to The Waters of Bristol Nursing Home staff and Virginia Hospice and Palliative Care staff, including Mary and Christy, for all the love and care shown to Ira. The family will receive friends from 11:00 AM until 12:00 PM Monday, February 14, 2022 at Garrett Funeral Home. The funeral service will follow at 12:00 PM Monday in the Riverview Chapel with Pastor Carl Howell officiating. The committal service and interment will be conducted at 3:00 PM Monday at Southwest Virginia Veterans Cemetery in Dublin, VA with military rites conducted by Seymour Johnson Base Honor Guard, Goldsboro, NC. Condolences for the family may be sent and viewed by visiting www.garrettfuneralhome.com. Mr. Carter and his family are in the care of Garrett Funeral Home, 203 N. Shady Ave., Damascus, VA 24236; ph.#: (276) 475-3631.

TSgt Ira Cebert Carter, 94, of Damascus, VA passed away on Thursday, February 10, 2022 in The Waters of Bristol Nursing Home in Blountville, TN. He was born in Tamcliff, WV on September 3, 1927, a son of the late Estell and Adline Cline Carter.... View Obituary & Service Information

The family of TSgt Ira Cebert Carter created this Life Tributes page to make it easy to share your memories.

Send flowers to the Carter family.