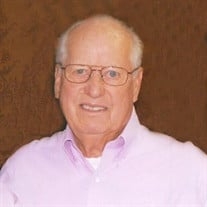 Homer Wilson, 85, of Damascus, VA passed away on Tuesday, February 15, 2022 in the Johnston Memorial Hospital, Abingdon, VA. He was a lifelong resident of Damascus, VA born on January 10, 1937, a son of the late Tom and Esther Wilson. In addition to his parents, he was preceded in death by a sister, Helen Brooks; and a brother, Warren Wilson. He was a masonry contractor for many years and later retired as the maintenance supervisor for the Washington County, VA School System. After his retirement, he continued working in maintenance for Highlands Union Bank up until the age of 79. Homer was an active volunteer for the Damascus Little League for 25 years. He served on the Washington County Industrial Development Association board. Homer was an avid reader and read his bible daily. He was a member of Highpoint Baptist Church. In his younger years, he enjoyed coon hunting, metal detecting, and hunting arrowheads. He always had a well kept garden that he enjoyed sharing with his family and friends. He loved spending time with his family, especially his grandkids. Needless to say, Homer was always active! Homer is survived by his loving wife of 63 years, Evon W. Wilson; two sons, Tony Wilson and his wife, Michelle, of Coatesville, PA and Michael Wilson and his wife, Heidi, of Pataskala, OH; six grandchildren, Tyler Wilson and his wife, Danielle, Molly Wilson, Brandon Wilson and his wife, Meghan, Jennifer Wilson, Cody Cogdill, and Zane Wilson; seven great grandchildren, Carson Wilson, Mason Wilson, Olivia Gross, Madison Wilson, Parker Blevins, Tristan Wilson, and Ryleigh Wilson; five sisters, Mary Grindstaff, Katherine Baker, Betty Wright and her husband, Lacy, Hazel Gentry and her husband, Bill, and Joan Smith; and several nieces and nephews. The family would like to express a special thank you to Dr. Pavan Annamaraju, Falls Plaza Dialysis Center staff, and Johnston Memorial Hospital staff for all the care shown to Homer during his illness. The family will receive friends from 10:00 am until 11:00 am Saturday, February 19, 2022 at Garrett Funeral Home. The funeral service will follow at 11:00 am Saturday in the Riverview Chapel at Garrett Funeral Home with Pastor Robby Coggins officiating. The committal service and interment will follow at Sunset Memorial Park, Damascus, VA. Pallbearers will be Tyler Wilson, Brandon Wilson, Cody Cogdill, Zane Wilson, Randy Winters, and Lacy Wright. Condolences for the family may be sent and viewed by visiting www.garrettfuneralhome.com. Mr. Wilson and his family are in the care of Garrett Funeral Home, 203 N. Shady Ave., Damascus, VA 24236; ph.#: (276) 475-3631.

Homer Wilson, 85, of Damascus, VA passed away on Tuesday, February 15, 2022 in the Johnston Memorial Hospital, Abingdon, VA. He was a lifelong resident of Damascus, VA born on January 10, 1937, a son of the late Tom and Esther Wilson. In addition... View Obituary & Service Information

The family of Homer Wilson created this Life Tributes page to make it easy to share your memories.

Homer Wilson, 85, of Damascus, VA passed away on Tuesday, February...

Send flowers to the Wilson family.