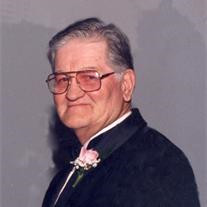 (Must have Broadband Connection to view Video Tribute) Herbert Eugene Cook, age 85, born in Washington County, Virginia, on April 14, 1923, passed away on Monday, April 14, 2008 at Johnston Memorial Hospital in Abingdon, Virginia. He was the son of the late Marshall Carl and Ruth Widener Cook. He served his tour of duty in the U.S. Army during World War II in the 17th Airborne Division Company B, 194th Battalion from April 1943 until January 1946. Herbert was a member of Wright?s Chapel Church. In addition to his parents, he was also preceded in death by his wife, June Sutherland Cook; and two brothers, Clayton Cook and Ernest Cook. He is survived by his son, Joe Cook and his wife, Donna, of Damascus, Virginia; one granddaughter, Tiffany Ratcliff and her husband, Scott, of Abingdon, Virginia; one grandson, Josh Cook and his wife, Paula, of Chilhowie, Virginia; three great grandchildren, Eli Ratcliff, Caleb Cook, and Leah Cook; four sisters, Martha Dolinger, of Wideners Valley, Rebecca Heath, of Meadowview, Virginia, Eleanor Dolinger, of Wideners Valley, and Mary Thomas, of Abingdon, Virginia; three brothers, Vernon Cook, of Wideners Valley, Charles Cook and his wife, Doris, of Damascus, Virginia, and Robert Cook and his wife, Lorraine, of Damascus, Virginia; three brothers-in-law, Sam Widener and Amy, of Damascus, Virginia, Jerry Widener and his wife, Eula, of Damascus, Virginia, and P.G. Widener and his wife, Dawn, of Wideners Valley; and several nieces and nephews. Herbert is also survived by a very special friend, Elizabeth Moore, of Glade Spring, Virginia. The funeral service will be conducted at 8:00 P.M. Wednesday, April 16, 2008 in the Garrett Funeral Home Chapel with Pastor Fred Minnick officiating. The committal service and interment will be at 11:00 A.M. Thursday, April 17, 2008 at Sunset Memorial Park in Damascus, Virginia with military graveside rites conducted by the Highlands Fellowship Veterans Honor Guard. Honorary pallbearers will be Buddy Thomas, Danny Thomas, Sam Widener, Jerry Widener, P.G. Widener, Paschal Grindstaff, and Scott Ratcliff. In lieu of flowers, the family requests that memorial contributions be sent to Wright?s Chapel in honor of Mr. Cook, c/o Jean Prater, 33478 Widener Valley Road, Damascus, VA 24236. The family would like to extend a special thanks to the 5th floor medical staff at Johnston Memorial Hospital and all the family members and loving friends who stood beside them during this difficult time. The family will receive friends from 6-7:45 P.M. Wednesday prior to the funeral service at Garrett Funeral Home. Condolences and messages of sympathy may be sent and viewed and a video tribute may be viewed by visiting www.garrettfuneralhome.com. Mr. Cook and his family are in the care of Garrett Funeral Home, 203 N. Shady Street, Damascus, VA 24236, 276-475-3631.

(Must have Broadband Connection to view Video Tribute) Herbert Eugene Cook, age 85, born in Washington County, Virginia, on April 14, 1923, passed away on Monday, April 14, 2008 at Johnston Memorial Hospital in Abingdon, Virginia. He was the... View Obituary & Service Information

The family of Herbert Cook created this Life Tributes page to make it easy to share your memories.

(Must have Broadband Connection to view Video Tribute) Herbert...

Send flowers to the Cook family.