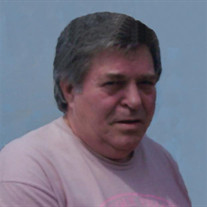 Henry Franklin "Bucky" Hand, III, 81, of Damascus, VA passed away on Wednesday, January 16, 2019 at his residence. He was born in North Holston, VA on January 2, 1938, the son of the late Frank and Edna Hand. In addition to his parents, he was preceded in death by a son, James Michael Hand; a sister, Alma Sue Stroud, and a granddaughter, Michelle Renee Wolfe. He grew up in Norfolk, VA where he joined the military serving in the U.S. Army 101st Airborne during which he spent one year in his beloved Iceland. After completing his military service he had lived in NY for 17 years prior to moving to Damascus, VA in 1977. He was a retired electrician. Bucky was a life member of the Veterans of Foreign War Post. No. 9830 of Damascus, VA, the Loyal Order of Moose Lodge of Washington County, VA, and was a Mason with Harmony Masonic Lodge No. 241 in Whitestone, NY. He was a avid fly fisherman, loved hunting, and enjoyed listening to and playing bluegrass music. He is survived by his loving wife of 41 years, Margaretta "Maggi" Chieffo Hand; two daughters, Laurie Ann Hand and her husband, Jon Gowdy of Arlington, VA, and Kerry Elizabeth Wolfe and her husband, Tim Wolfe, of Damascus, VA; six grandchildren, Scott Gowdy, Benjamin Gowdy, Sasha Mirage, Courtny Gonzalez, Timothy Wolfe Jr. and his wife, Morgan, and Heather Wolfe; five great grandchildren, Amir Hikal, Dalia Hikal, Caspian Kanas, Elijah Berryhill, and Angelo Gonzalez; and several nieces and nephews. The family would like to extend a special thanks to the Damascus Volunteer Rescue Squad, Damascus Chief of Police Mike Hounshell, and all the East 2nd Street community friends. A Celebration of Life Service will be conducted at 2:00 pm Saturday, January 26, 2019, in the Riverview Chapel at Garrett Funeral Home with Mr. Walt Staude officiating. Following the Celebration of Life Service a Masonic Service will be conducted by the Liberty Hall Masonic Lodge No. 104 and Military Honors will then be presented by the U.S. Army Nation Guard Honor Guard and the Highlands Veterans Honor Guard. In lieu of flowers, the family is requesting that donations be made to a favorite charity of one's choice. Condolences for the family may be sent and viewed by visiting www.garrettfuneralhome.com. Mr. Hand and his family are in the care of Garrett Funeral Home, 203 N. Shady Ave., Damascus, VA 24236; ph.#: (276) 475-3631.

Henry Franklin "Bucky" Hand, III, 81, of Damascus, VA passed away on Wednesday, January 16, 2019 at his residence. He was born in North Holston, VA on January 2, 1938, the son of the late Frank and Edna Hand. In addition to his parents, he... View Obituary & Service Information

The family of Henry Franklin "Bucky" Hand, III created this Life Tributes page to make it easy to share your memories.

Send flowers to the Hand family.