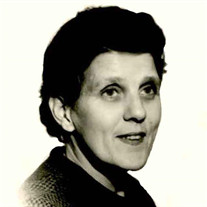 Helen Louise Burchette Morgan, 92, of Damascus, Virginia passed away on Tuesday, February 7, 2017 in Gloucester, Virginia. She was born in Monmouth, Illinois on August 16, 1924, a daughter of the late Wayne and Mary Burchette. In addition to her parents, she was preceded in death by her husband, Tom Morgan; and two sons, Joe Mack Morgan and Tommy Morgan. Before moving to Gloucester, Virginia she had been a resident of Damascus, Virginia since she was three years old where she traveled to by a covered wagon from Illinois. She had worked for many years at the Damascus Hosiery Mill and was a member of the First Baptist Church. She is survived by a daughter, Linda Carol Joswick and her husband, Michael, of Gloucester, VA; her daughter-in-law, Brenda Morgan of Damascus, VA; two granddaughters, Angie Brooks and Sherry Morgan Hicks; four great granddaughters, Ashley Jenkins, Olivia Jenkins, Kloe Hicks, and Lilly Hicks; and a special nephew, Bobby Wayne Burchette. The family will receive friends from 1:00 PM until 2:00 PM Saturday, February 11, 2017 at Garrett Funeral Home. The funeral service will follow at 2:00 PM Saturday in the Riverview Chapel at Garrett Funeral Home with Pastor David Griffin officiating. The committal service and interment will follow at Sunset Memorial Park, Damascus, VA. Pallbearers will be Bill Clark, Don Foster, Marshall Moser, Larry Sullins, Thomas Sullins, and Tony Doss. Honorary Pallbearers will be Ralph Cornett and John Wright. In lieu of flowers, the family is requesting that donations be made to Damascus Volunteer Rescue Squad, P.O. Box 458, Damascus, VA 24236. Condolences for the family may be sent and viewed by visiting www.garrettfuneralhome.com. Mrs. Morgan and her family are in the care of Garrett Funeral Home, 203 N. Shady Ave., Damascus, VA 24236; ph.#: (276) 475-3631.

Helen Louise Burchette Morgan, 92, of Damascus, Virginia passed away on Tuesday, February 7, 2017 in Gloucester, Virginia. She was born in Monmouth, Illinois on August 16, 1924, a daughter of the late Wayne and Mary Burchette. In addition... View Obituary & Service Information

The family of Helen Louise Burchette Morgan created this Life Tributes page to make it easy to share your memories.

Send flowers to the Morgan family.