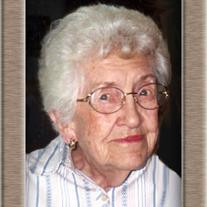 (To view Video Tribute you need a Broadband - DSL or Cable - connection) Hazel W. Clark, age 91, of Damascus, Virginia, passed away on Thursday, November 23, 2006 at her residence. She was a lifelong resident of Washington County, Virginia, and was the youngest of thirteen children born to the late Andrew and Martha Widener. She was the widow of Guy Clark and was also preceded in death by six sisters and six brothers. Mrs. Clark was a member of Pleasant View Baptist Church and was well known for her home cooking. She is survived by two sons, David A. Clark and his wife, Jane, of Damascus, Virginia and Billy L. Clark and his wife, Sharon, of Damascus, Virginia; three granddaughters, Bobbi Jo Clark, Mary Katherine Clark, and Sarah Jane Clark; her special neighbors and friends, Jerry and Eula Widener; and several nieces and nephews. The funeral service will be conducted at 8:00 P.M. Saturday, November 25, 2006 in the Garrett Funeral Home Chapel with Rev. Warren Wilson officiating. The committal service and interment will be at 2:00 P.M. Sunday, November 26, 2006 at Sunset Memorial Park, Damascus, Virginia. Pallbearers will be Johnny Bishop, Robert Snodgrass, Jerry Widener, Lacy Wright, Billy Widener, and Danny Thomas. Honorary pallbearers will be Jack DeBusk, Clarence DeBusk, Marvin Grubb, Mike Grubb, Tommy Mooney, Charles Ray Barr, and Wayne Ritchie. Flowers will be accepted or memorial contributions may be sent to the Damascus Volunteer Rescue Squad, P.O. Box 458, Damascus, VA 24236. The family will receive friends from 6-7:45 P. M. Saturday prior to the funeral service at Garrett Funeral Home or at anytime at the residence. Condolences may be sent to the family and a memorial video tribute may be viewed by visiting www.garrettfuneralhome.com or you may fax condolences to (276)-475-5902. Mrs. Clark and her family are in the care of Garrett Funeral Home, 203 N. Shady Ave., Damascus, VA 24236, (276)-475-3631.

(To view Video Tribute you need a Broadband - DSL or Cable - connection) Hazel W. Clark, age 91, of Damascus, Virginia, passed away on Thursday, November 23, 2006 at her residence. She was a lifelong resident of Washington County, Virginia,... View Obituary & Service Information

The family of Hazel Clark created this Life Tributes page to make it easy to share your memories.