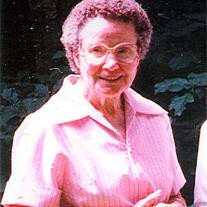 View this VideotributeGrace Mae Hurley, age 90, of Damascus, Virginia, went to be with the Lord on Saturday, April 29, 2006 at Grace Healthcare Center in Abingdon, Virginia. She was a life long resident of Damascus, Virginia, and was the daughter of the late Lester and Nellie Hurley. After retiring from Damascus Hosiery Mill, Grace dedicated her life to taking care of her parents. She was a member of the First Baptist Church in Damascus, Virginia. In addition to her parents, she was also preceded in death by two sisters, Lillie Jessie and Edith Campbell, and five brothers, Paul Hurley, Robert Hurley, L.C. Hurley, Howard Hurley, and Thomas Hurley. She is survived by two sisters, June Veatch and her husband, Carl, of Americus, Georgia, and Margaret Taylor and her husband, Bob, of Charlotte, North Carolina; and several nieces and nephews. The funeral service will be conducted at 2:30 P.M. Monday, May 1, 2006, at the graveside at Sunset Memorial Park in Damascus with Rev. Alan McCullough officiating. Pallbearers will be Alan Hurley, John Hurley, John Hurley Jr., Steve Taylor, Roy Barlow, Randy Forrester, and Ronnie Riddle. In lieu of flowers, the family requests that memorial contributions be sent to the First Baptist Church, P.O. Box 993, Damascus, VA 24236. The family would like to express their special appreciation to Roy and Carla Barlow for all their love and support to Grace throughout the years and especially during her illness. Condolences may be sent to the family and a video memorial tribute may be viewed at www.garrettfuneralhome.com. Ms. Hurley and her family are in the care of Garrett Funeral Home, 203 N. Shady Ave., Damascus, VA 24236, 276-475-3631.

The family of Grace Hurley created this Life Tributes page to make it easy to share your memories.