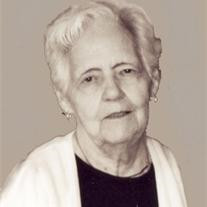 View this Videotribute Gladys L. Stringer, age 83, of Konnarock, Virginia, passed away Monday, December 12, 2005 at her son's residence. She was a native of Clarksville, Tennessee and had lived in Washington County, Virginia most of her life. She was a preceded in death by her husband, R. C. Stringer. Mrs. Stringer was a member of the Damascus Senior Citizens and an active member of the Azen Baptist Church. She is survived by one son, Irvin Stringer and his wife, Ann, of Abingdon, Virginia, who so tenderly cared for her during her illness; three sisters, Dorothy Hutchinson, Colene Robertson and her husband, Jerry, and Olene Suiter and her husband, Robert "Bob", all of Clarksville, Tennessee; two brothers, Doffie Claxton and Ewing Claxton and his wife, Ann, all of Clarksville, Tennessee; three grandchildren; ten great grandchildren; one great great granddaughter; and several nieces and nephews; special friends, Wanda Hayes, Blanche Clark, Evilee Morris, Estelle Walls, Vera Haga, and Jim Sadler. The funeral service will be conducted at 8:00 P. M. Wednesday, December 14, 2005 at the Azen Baptist Church in Konnarock, Virginia with Rev. Jim Lundy, Jr. and Pastor Wesley Stringer officiating. The committal service and interment will be at 10:00 A. M. Thursday, December 15, 2005 in the Azen Cemetery, Konnarock, Virginia. Pallbearers will be Wesley Stringer, Dave Jones, Andrew Jones, Dan Harton, Todd Blevins, and Keith Powers. Honorary pallbearers will be the men of the Azen Baptist Church. In lieu of flowers, the family requests that memorial contributions be sent to the Azen Baptist Church, c/o Elizabeth Waddell, 28925 Jeb Stuart Highway, Damascus, Virginia 24236 or Hospice of Southwest Virginia, 325 Cummings Street, Abingdon, Virginia 24210. The family will receive friends from 6-7:45 P. M. prior to the funeral service at Azen Baptist Church. Condolences may be sent to the family and a memorial video tribute may be viewed at www.garrettfuneralhome.com. Mrs. Stringer and her family are in the care of Garrett Funeral Home, 203 N. Shady Ave., Damascus, VA 24236, 276-475-3631.

View this Videotribute Gladys L. Stringer, age 83, of Konnarock, Virginia, passed away Monday, December 12, 2005 at her son's residence. She was a native of Clarksville, Tennessee and had lived in Washington County, Virginia most of her life.... View Obituary & Service Information

The family of Gladys Stringer created this Life Tributes page to make it easy to share your memories.

Send flowers to the Stringer family.