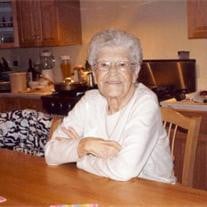 View this Videotribute Gladys V. Shumate, age 84, of Damascus, Virginia, passed away on Friday, April 14, 2006 at Johnston Memorial Hospital in Abingdon, Virginia. She was a native of Johnson County, Tennessee, and had lived in Damascus, Virginia, most of her life. She was the daughter of the late Dan and Virgie Fritts and was the widow of Lawrence W. Shumate. Mrs. Shumate was a retired seamstress from the Harwood Manufacturing Company in Abingdon, Virginia, and was a member of the First Baptist Church in Damascus, the W.M.U., and the Damascus Senior Citizens. She enjoyed making and decorating cakes and crafts and also her flower gardens. She was preceded in death by a grandson, Larry Shumate II, one sister, and two brothers. She is survived by one son, Larry W. Shumate and Virginia, of Covington, Georgia; two daughters, Carol Musser and her husband, Eugene, of Dade City, Florida, and Donna Dove, of Conyers, Georgia; three grandchildren, Deanna Grubbs, Toni Ecker, and Tara VanWormer; seven great grandchildren, David Ecker, Natalie Ecker, Michael Grubbs, Bryan Grubbs, Alec Grubbs, Emily VanWormer, and Nathan VanWormer; and several nieces and nephews. The funeral service will be conducted at 8:00 P.M. Monday, April 17, 2006, in the First Baptist Church with Rev. Alan McCullough officiating. The committal service and interment will be at 11:00 A.M. Tuesday, April 18, 2006 at Sunset Memorial Park in Damascus, Virginia. In lieu of flowers, the family requests that memorial contributions be sent to the Damascus Volunteer Rescue Squad, P.O. Box 458, Damascus, Virginia 24236. The family will receive friends from 6:30 to 7:45 P.M. Monday prior to the funeral service at the church. Condolences may be sent to the family and a video memorial tribute may be viewed at www.garrettfuneralhome.com. Mrs. Shumate and her family are in the care of Garrett Funeral Home, 203 N. Shady Avenue, Damascus, VA 24236, (276) 475-3631

View this Videotribute Gladys V. Shumate, age 84, of Damascus, Virginia, passed away on Friday, April 14, 2006 at Johnston Memorial Hospital in Abingdon, Virginia. She was a native of Johnson County, Tennessee, and had lived in Damascus, Virginia,... View Obituary & Service Information

The family of Gladys Shumate created this Life Tributes page to make it easy to share your memories.

Send flowers to the Shumate family.