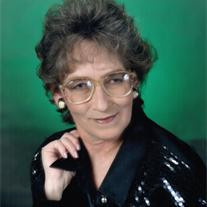 Georgia June Pruitt, age 56, of Whitetop, Virginia, passed away Saturday, June 18, 2011 at her residence. She was a native of Grayson County, Virginia and had lived in Wilkesboro, North Carolina for most of her life before moving back to Whitetop,... View Obituary & Service Information

The family of Georgia Pruitt created this Life Tributes page to make it easy to share your memories.

Send flowers to the Pruitt family.